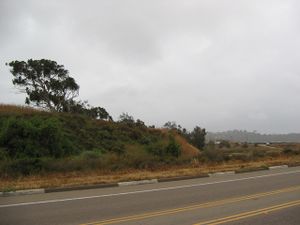 The geohash is near that tree. A view from across the road. 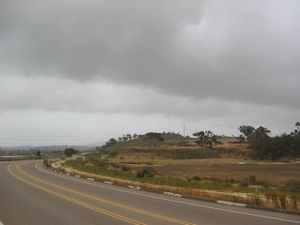 A north-facing view of the geohash's plot of land. The geohash is towards the back, at the edge of the plot. 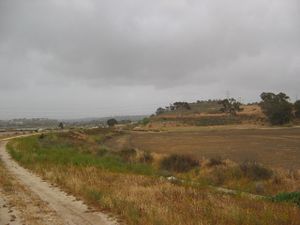 Another view northward from the adjoining dirt path south of the geohash.

This is the geohash for the San Diego graticule on 2008-05-22. These were the first reasonably reachable coordinates in the graticule since the project's public launch.

The coordinates were just east off the road El Camino Real, on what appeared to be private, undeveloped property, just slightly south of the Del Mar Horse Park. At 5pm, there were several people taking strolls, several bicyclists passing by on the road, and several riders on horseback down on the aforementioned property. Unfortunately, none of them, except for Somnivore, bore any apparent relation to the project.

The weather was cloudy and a light sprinkle commenced shortly before Somnivore left the area at 5:30pm.

People who reached these coordinates:

Somnivore - Note: I did not have a GPS unit and approximated the geohash's actual location as described on this page based on my recollection of the somewhat outdated satellite image.