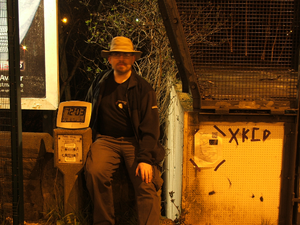 The official time for sunrise in Sheffield was 6:04am. To this end I returned to the location first thing in the morning ready for this moment. Of course, as expected, the nature of the local horizon (buildings, and upon a moderate rise at that) meant that there was no actual sun visible, although the sky was brightening all the time.

And so I took a quick jaunt up the canal, for a short way. I'll have to admit that I was half hoping to find some boater taking an early morning jaunt. With a few words of explanation, I might well be able to claim both Hitchhiker and Water Hash achievements. But I knew it would be a long-shot, for though a short distance to the west there was a canal-basin with many boats, it was too early in the morning to really get any 'traffic' along the waterway, it was the wrong time of year for holiday-makers (really just leaving the permanent boaters who were likely staked out at semi-permanent seasonal moorings) and even a casual boater from the marina would have had to pass through a couple half dozen locks, so persuading someone otherwise at rest to steam on down (after which they'd need to turn around and come back) wasn't likely. Needless to say, I never got my Water Hash credit.

Further up the canal, however, there was a bridge (actually over the nearby railway-line) which elevated me enough to see the rising sun. A little meandering and a short walk back to the target location meant that I could now take a few photos of the pipe-bridge (this time from the north bank of the canal, further away from the presumed target spot, but still within a stone's throw) with distinctly bright and dawn-lit skies behind.

(The rest of the day had now to be devoted to the what may laughingly be called the 'working day', with a number of car-bound trips all leading away from the geohash location (and no real reason to revisit). Once work was over with, with the sun low on the horizon, a drive back to Meadowhall promised the possibility of a sunset-revisit to the site, but that seemed a tad gratuitous and so instead a good hour of window-shopping for GPS equipment (involving not a short amount of time playing Angry Birds in the Apple store, as well as asking some serious questions about the various bits of GPS-enabled hardware currently available) took the time well past sunset.)

Not much to tell, here, save that tonight the other carriageway of the Tinsley Viaduct lower deck was closed this time. Still, was nice to bracket the day.

Note: That was midnight at both ends of the day, in separate visits, and in-between them another visit meant...