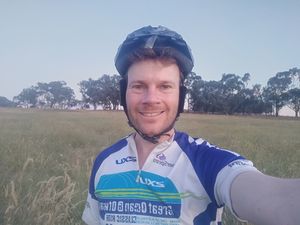 In a fallow field at dusk east of Benalla, Victoria.

Another successful Benalla-adjacent geohash. Very straight-forward mostly - I saw the hash when I woke up, knew I'd be going for it all day at work at the precast factory, rode my bike home and then, getting on my *other* bike - I have a crappy old road bike and a fancy new road bike - I hurtled off down the road towards the hash.

As I was leaving the motel and heading along next to the airport I soon realised that the warm, dusky evening had produced an absolute brick wall worth of tiny insects in the air. It was like heavy rain. I didn't bring along my work's safety glasses so I just had to squeeze my eyes shut, look at the ground, and glance up occasionally through my fingers to see if I was about to crash into something.

I thought it might ease up as I got into different terrain or later as the sun set. But no, it got worse. After half an hour or so I turned off the familiar road east out of town onto a quiet dirt road south. And the bugs got even more shockingly thick! I had to stop every couple of hundred metres to scoop the stinging sensation off my eyeballs.

The sunset was very dramatic, from what little of it I could bear to see of it. After crossing a few creeks (even more bugs!) I arrived at the hashpoint. A fallow field of tall grass on rolling hills overlooking a valley. Very picturesque.

I vaulted the barbed-wire fence and tramped 100m over to the hash. A few photos and some admiring of the dregs of the sun and I was back to my bike, the fence proving somewhat more difficult on the return.

I rode back along the dirt road to retrace my steps. A hoony teen passed me stirring up dust but honestly it was a relief as it seemed to scatter the insects.

I returned home a bit before 9pm. Although the bugs had abated somewhat eventually I still had to spend some time scraping the corners of my eyes free of carcases.