Dense forest between Beihingen and Bösingen with a wooden hut nearby

Cross the Waldach stream via the small footbridge, then head up towards the hut and scout for an access path that's not covered by shrubs.

Dumped the bike in the forest after the bridge and bee-lined towards the hut while looking out for fungi. Found some good ones! Got a bit lost but found the hut. Had lunch and left a chalk tag on the steps to the porch. At this point I wanted to turn on the GPS, but my phone was asking me for the PUK because the screen lock messed up in my pocket. Luckily after some cursing and removing the SIM card I got it running. Had to bushwhack my way through small, dense patch of fir wood and made it to the spot. 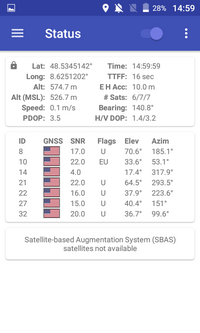