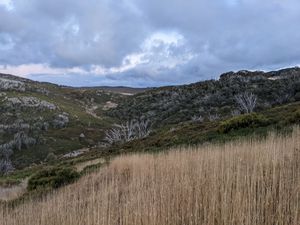 Off the road near Falls Creek Village.

This is a placeholder description for when Rob writes his own expedition report.

I, Felix Dance, had just returned home from my 2022-05-05 -37 145 geohash when I saw Rob's message in the group chat. He was staying at Mt Beauty and the hash that day was at Falls Creek - up the beautiful but grueling sealed road into the Victorian Alps, and accessible just off to the side.

Amazingly, Rob decided to go for it, and on bike too (some discussion was had that it should be his cargo-electric bike, but controlling it on the descent was a sticking-point).

It was a cold day and Rob was ascending into the sky (about 1.5 kms above sea level if memory serves me), and it was also getting late in the afternoon. So it got a lot colder. Rob showed evidence of hail and then snow on his arm.

But at last he reached the top. He paused to celebrate the gates to the city. He left the road and visited the hash-point proper and returned as night fell into the frigid wind of the descent, the sight of the spectacular sunset his only source of warmth.

He celebrated back in Mt Beauty by drinking a bottle of Kiewa Valley Chocolate Flavoured Milk.