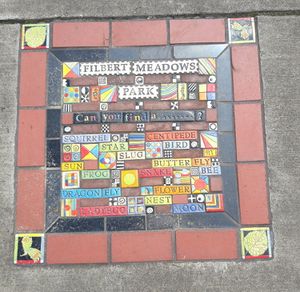 In Filbert Meadows Park, in the Fir Grove neighborhood northwest of Eugene.

I ran an errand a few miles from home, and since I'd gone that far figured I might as well continue on for another 100 miles or so down I-5 to visit this hashpoint.

Generally, it's hard to imagine an easier place to perform the geohashing ritual -- shuffle around until standing at the exact right place, take pictures, leave -- than in a city park. The wrinkle this time was that the hashpoint was right at the edge of a playground, and standing around taking apparently random photographs didn't seem like it would be calculated to bring out the best in the attendant parents. So, I wandered over to the park mosaic pictured above, and figured that might have to do.

But, just as I was about to move on, the parents and children all more or less simultaneously decided to move on, so I was able to swing back by and get a shot of the now-deserted playground from the hashpoint on its edge.

After the expedition, I went for a four-mile run along Eugene's terrific network of riverside trails, and then drove around a bit in the south end of the Willamette Valley before pointing the prow northward towards home.