Should you happen to win this achievement, or the honourable mention, you will surely want to use this template to make yourself a ribbon.

This achievement can be attained only when the place where you live is exactly under the coordinates of a particular day. This is incredibly lucky, and the chance of this happening to you is the area of your domicile divided by the area of the graticule you're in. Assuming a sphere of radius R (Earth is approximately 6,370,000m), θ = the absolute value of your graticule's latitude in degrees, and H = the size of your domicile in square metres, then the probability P is represented by the following formula:

If this does happen to you, you are required to throw a mad-keen party at a day's notice.

If we assume that the probability of two or more geohashers at different graticules winning the Coach Potato Achievement on the same day is zero. So if for example there are 5,000 geohashers the expected time for this to happen is 54 years and 9 months.

This is one of those things that probably won't ever happen, but how cool would it be if it did?.

You could also potentially purchase a house or apartment in which a geohash falls and settle the location extremely quickly, a less math-prone method of gaining the Couch Potato Geohash through attempt rather than blind chance. 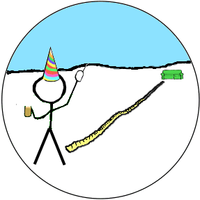 Keep a keen eye and be willing to introduce geohash-neophyte friends to the sport. Or make new friends, who live at the day's lucky dwelling. This will wildly increase the odds.