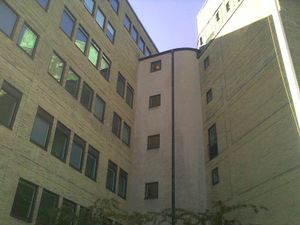 This day the location wound up near Stadshagen (a park) in the city proper. More precisely it's at a company building belonging to Lantmännen.

Nothing particular, just visit the spot. We aimed at 16:00.

I spoke to a few friends and two of them agreed to visit the spot. I caught the bus from Tekniska Högskolan (where I study) and met up with Klas at Odenplan, where we decided we were short on time so we took the subway to Stadshagen rather than walk. At the site we found a fairly tall building, which garbled all GPS reception at the closest to the precise coordinates. It seemed the spot we sought was a few paces inside, but that section of the building was under renovation, and noone was there. Some rubble was visible inside, possibly at the exact spot. Robert joined us after a few minutes.

Undeterred, we went into the other wing of the building and explained our task to the receptionist, who was friendly, somewhat amused, and fairly bemused. She told us the janitor had already gone home, but we were given permission to visit the balcony which was as close as we could get. Inside the building, the two wings were indeed joined, but we would not be able to get through, so we just snapped a couple of pictures.

It turns out the balcony was more of a small fenced in ledge, but indeed quite high. The view was spectacular, but with us thinking of our first geohash expedition (so reaching that spot) and suffering from varying degrees of height fear (one quite severe), at least I forgot to take any scenic shots. Or any that show the ledge itself. The sun prevented good shots of the roof where we should have gone, and we chose not to risk our welcome or lives trying to climb out.

After having done our best effort at reaching the coordinates (we did never get 4 decimals of both to match), we took a walk with a sidetrip to the nearest Geocache, and a bus back to Proxxi, where we all usually spend our Monday evenings.

LoneTech's trip to the Geohash, on the balcony and our trip back.