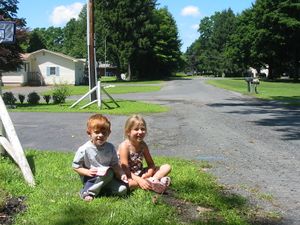 The side of a suburban street in West Springfield, Massachusetts. We went to the wrong street, because I misread the map.

Sara with her daughter and son.

It was a disorganized day, so the kids and I didn't have much time for the expedition, but I wanted to go anyway because we haven't geohashed in a few days. I looked at Google maps and decided that although we just purchased a GPS, we didn't need it today, because the site is so clearly right at the edge of the pavement, across the street from the midpoint between the second and third house after the corner. We left the GPS at home.

We drove over there and parked the car near what I thought was the correct point, and I wondered why Google satellite view hadn't shown that extra house and extra street, since neither the house nor the street looked particularly new. Anyway, we were right at the edge of the pavement, across the street from the midpoint between the second and third house after the corner, so we took pictures and wrote "XKCD" on the pavement. Then, because we were in a hurry, we got in the car and left. We would have liked to visit the nearby state park and/or the nearby municipal park, but we didn't have time.

Then we went home, making a couple wrong turns along the way, which is in keeping with the day's theme, because when I looked again at Google satellite view just now, I realized that we were near the wrong corner; we were one block east of the hashpoint. Oh well.

I'm calling this "Not reached - Technology" but I don't know if that's the correct category.