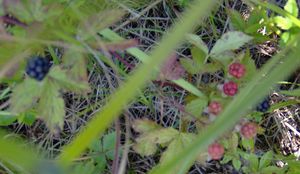 In some trees near a meadow in Wilmington, VT

Sara with her daughter and son

This was not too far from the site of our attempt at a canoeing geohash and this expedition also failed.

We stopped on the way up at a rest area where we discovered they were selling used children's books. We stopped again at the rest area just over the Vermont line where they have a good playground. By the time we parked near the hashpoint, we had been in the car a long time and it was much later than I had wanted it to be. Our time was limited because we had tickets to a minor-league baseball game in the afternoon.

It was hot and humid, and the kids were affected by the weather, especially my daughter. Maybe she was trying to get a ribbon for whining during a geohash.

I remembered from looking at Google satellite view that the hashpoint was in the trees but that one could get very close the point by walking through a clearing, so we walked into a meadow fairly close to the hashpoint. There was a No Trespassing sign, but luckily we saw a man working outside an old barn.

I told him that my kids and I were playing an adventure game from the Internet in which we had to go to a place the Internet told us to go to, and that today's place was up in his meadow and asked if it would be okay for us to go into the meadow and take a few pictures. He thought for an instant and then said "Alright, but be careful; it's wet up there." That's all - not one question about geohashing or anything, as if he had geohashers coming and interrupting him every week. I thanked him and we proceeded.

Walking up the slight slope through the meadow was harder for the kids than it was for me, because the plants that were knee-high or thigh-high for me were chest-high or shoulder-high for them. Eventually I determined that there was a creek separating us from the hash, and a lot of very wet ground around the creek, through which I didn't want the kids to walk.

If we had had more time, we could have walked down to the road, across the creek on the road, and up the hill again on the other side of the creek, but we were out of time.

When time for a geohash is limited, especially when one is accompanied by people who can't move quickly, one should carefully sketch all the clues available from Google Satellite View - don't plan on relying solely on the GPS. I could have made myself a drawing beforehand showing that the meadow with the barn in it was the wrong clearing and the smaller clearing to its west was the correct clearing, and if I had done that we would have gotten to the hashpoint.

Better yet, leave the house earlier.