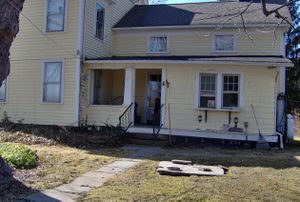 In or behind someone's house in Suffield, Connecticut.

Sara and her son

On the ride from school to the hashpoint, my son held the GPS the whole time and read off the numbers to me as the distance decreased. This was exciting for me because last summer when we started geohashing, he couldn't have done that.

We parked near the hashpoint and my son asked "Are we going to another woods?" (Note to non-native speakers of English: That sentence is cute but not grammatical.) I told him no, and he said he preferred the geohashes in the woods.

We knocked on the door of the hash house, but there was no answer. If someone's not home I'm willing to walk into someone's driveway or front yard a little ways, but not to go around their house into their fenced-in back yard. At the front door, the GPS said the hashpoint was 24 feet (about 7m) into the house with accuracy range of 16 feet (about 5m). The house wasn't that big, so maybe the point was actually in the back yard.

I'm calling this one "not reached" because in my heart, I feel that we didn't reach the hashpoint, although if there were an interesting ribbon at stake I might claim a success.