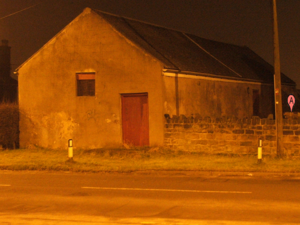 The side of a building off Briar Lane, Havercroft, Wakefield

Monty went on a whim.

Late in the day, Monty remembered to check the day's and weekend's points. As he was already supposed to go to Barnsley, that night, he decided to make a (longer than necessary) diversion to the target.

Quick research brought forth a route, some Streetviews of the site and such. Printed off some Ambassadorial explanations especially. That, as they say, was that. Apart from anything else, the office was being locked up.

It was a dark and stormy night. Well, a dark night. As most nights are. The air was cool, but dry, and very little wind.

Setting off from the north end of Sheffield at about 6pm, the car journey up on the A628 Pontefract Road was plain sailing, but the turning up into South Hiendely was missed. Blame the commuter traffic making it hard to find spots to stop. Anyway, after accidentally going straight through to Brierly, left into Hemsworth on the A6273 (a road known in my youth, albeit during daylight), then through Kinsley, Fitzwilliam and left on the B6428, the new plan was to head through Havercroft from the NE and turn down onto Briar lane.

Havercroft was long, and traffic was behind. Several stops in side-roads were made to be reassured of still heading in the right direction. Which meant that suddenly encountering the junction needed just before exiting the village was so much of a surprise (despite looking for a "triangular" road formation) that travel continued onwards. Largely because at this point there was a general pursuit by further commuter traffic, on a road with no obvious places to turn off.

Aha! A left turn to Shafton, so around we go, bearing left where possible. And then signs to indicate the location to be South Hiendely. Only... which direction? North or South? No setting sun to indicate direction. No people around to ask, save one or two at bus stops with little opportunity to park near. No sign of trees with moss (if you believe that Old Cub Scout's Tale). But there was the modern equivalent. Satellite dishes. They point (generally) south. And they revealed that the road was the northerly one towards the destination. Good.

Long story short, the outskirts of Havercroft were found. At the risk of going through again, the car was parked in Henry Avenue, just a short walk south of the destination. And right next to a bus stop that confirmed both location and direction beyond doubt.

A short walk and the target building was revealed by the neon (or sodium, or whatever they use these days) glow of the streetlights, matching the expectations pre-fueled by the StreetView survey.

Photos taken. Handy, having a tripod. Gives you good low-light photos. Set for shutter delay, let the camera take as long as it wants with the shutter open, very little wobble because the hands are nowhere near the camera at the time. Problem with first shot later found was that it was at an angle. GIMP allowed that to be adjusted. It actually looks straighter than the telegraph pole does in the second (correctly angled!) shot.

Next stop, the gateway further up the street that looks to be the way to the occupied building from within might emerge a kindly landowner with a willingness to listen to a reading from the Principia Geohashia. It's actually a farm, there's a tractor (too much in darkness and at a distance for even a tripod shot to show well enough). They sell things of a farm-like nature. There is no gate across the entrance but... there's a warning about dogs.

At this point, a transient bark emerged from somewhere round the back. Most likely not aimed at anyone in particular, but it cut short this journeyman's expedition plans. Adventure-seeker, yes; chew-toy, no. Not that I expected the epitome of the Baskerville curse to leap out at me immediately I step across the threshold of the property, but valour had at that moment been ousted by discretion. I think it was a best of five rounds in a Rock-Paper-Scissors-Lizard-Spock contest, but who am I to argue.

Besides which, I could see the geohashing point (at least the one indicated by the overhead plans). While, it was not close enough for a successful claim, that matters not. Well, less than retaining my throat un-ripped out by a devilish hell-hound. :)

Nope. Still none available. I'm still in No Batteries mode.