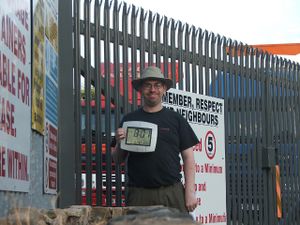 In the grounds of a haulage company on the outskirts of Barnsley, South Yorkshire, UK.

Monty attended, way too late in the day.

Originally, thought I might wander over in the morning, then at dinnertime, then that I'd get away from work quickly enough, but in the end I had other interesting things to do. But it was so close to me that I thought I better pay a casual visit, anyway.

Turned up. Gates closed and locked. Not much more to say, that bears repeating. Photos taken (what a particularly stupid grin!) and ActiveGeohasher page attached to gates in case of Cubicle Geohash interest on the part of those working there.

No tracklog. As per usual.

A couple of photos to upload, but for now just the Header one...

TBA. (Only consolation ones, though.)