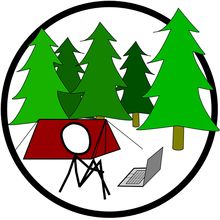 You may add this ribbon to your user page and achievement pages when you reach your seventh or last day.

This geohash achievement's objective is, for a period of 7 or more days, to attempt to visit hashpoint/s each day and not visit home while doing this. And by meaning "not visit home" we mean camping, (or overnighting in a suitable place) near the geohash (which may be that five star hotel hit by the hash if you're lucky like that). You show up at a destination before midnight, document your visit and then set off camping at the site, or if that is not possible, in immediate vicinity. Who does this for seven or more days in a row, can call him/herself as an Endurance Geohasher.

This is a very challenging achievement and not one that every geohasher is expected to or even able to complete. It goes without saying, that thorough preparations and documentation is necessary for achieving this merit! If you're about to camp in the wilderness, be careful and do it at your own risk!

The usual proof of each day's geohash is required, along with documentation of each campsite or other near-geohash accomodations. Anyone claiming this award is expected to document each day with sufficient thoroughness to demonstrate that the day was spent according to the rules of the award.

In the process of qualifying (or trying and failing to qualify) for this award, you are likely to achieve

Retrieved from "https://geohashing.site/index.php?title=Endurance_Geohashing&oldid=839278"
Category:
This page was last edited on 17 May 2022, at 20:18.
Privacy policy
About Geohashing
Disclaimers