A graticule is a network of geographic lines. We use it to refer to the rectangular[1] zones between the latitude and longitude lines, each 1°×1° in size. 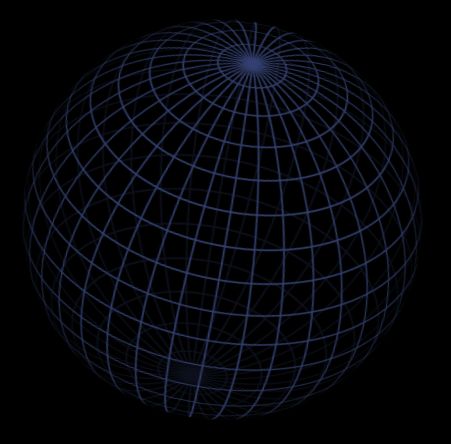 The shape and size of a graticule as measured over the ground (in miles or kilometers) varies with distance from the equator. A graticule near the equator (latitude 0) is almost exactly square shaped (roughly 111×111 km or about 69×69 miles); other graticules are still 111 km in north-south direction, but become narrower and narrower as one goes further away from the equator. In other words, the length of one degree of latitude is 111.0 ± 0.2 km, with the last digit uncertain because the Earth isn't a perfect sphere.

One degree of longitude corresponds to (111.0 ± 0.2 km) * cos(L), where L is your latitude. For example, the Groningen graticule, at +53° latitude, is 66.8 ± 0.1 km in the east-west direction. Graticules touching on the North and South Poles actually have the shape of a piece of pie, since the polar "border" of such a graticule has length 0. (Most web mapping applications can't display latitudes below -85° or above +85°.)

Since the size of each graticule depends only on its latitude, the formula shown below can be used to calculate its area, where R is the radius of the Earth and L is the (absolute value of the) latitude of the graticule (assuming a spherical Earth).

The equatorial circumference of the earth is 40 075.02 km, the meridional circumference is 40 007.86 km. We ignore the minor corrections required by the formulae for ellipsoids.

The height of one graticule is 1/360 of the meridional circumference, or 111.132 94 km. The width of a graticule varies from bottom to top. (Up is towards the nearest pole for the purposes of this exercise, though mathematically, using either pole will work.) The "base" of the graticule is at the latitude for which the graticule is named; the "top" is at one degree higher.

Graticules are numbered with a pair of numbers based on the corner closest to N0°, E0°, so that the graticule a location belongs to can be determined by truncating the degree fraction.

There are 360 x 180 = 64,800 graticules on the globe. So far only a fraction of these have been named and an even smaller fraction actually geohashed. A majority lie in open water.

Retrieved from "https://geohashing.site/index.php?title=Graticule&oldid=836994"
Category:
This page was last edited on 19 April 2022, at 22:37.
Privacy policy
About Geohashing
Disclaimers