I am a zen buddhist geohasher monk.

I live and work in Dunakeszi, Hungary (Europe) which is inside the Budapest graticule (lat.47, lon.19).

I do not own a GPS device, so i use aerial photos, maps and my senses to locate geohashes. 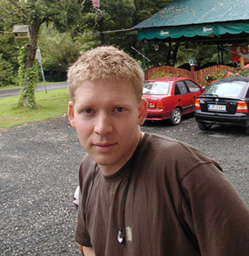 2008.06.12. My first ever geohash, and probably the first one in Hungary. It was a muddy-shoes-and-soaked-trousers party with Demet.

2008.06.29. A nice partially-bicycle geohash with Dem to the village where my Grandfather was born.

2008.07.29. A nice chatty walk with Dem, some hot chocolate, a pinpoint for meeting after her arrival back from LaRochelle,
France and before her departure to Turkey soon. Plus the planning of The Ani DiFranco Expedition.

2008.07.31. The industrial and downtown lone-rider geohash, and hours in a bus stop shelter because of a heavy shower.

2009.07.11. International geohash! Meeting thePIguy, who'd travelled more than 1000 kms to make an expedition in Hungary,
and was so kind as not to forget to inform the available fellow Hungarian hashers (i.e. me) about his plans.

2008.06.14. The destination point of this day was in one of my favourite areas, easy to reach as well, but being the birthday of Kata, a very good friend of mine, i chose visiting her rather than the geohash.

2008.08.15. Geohash meetup point for this day in graticule lat.47 lon.17 is close to my favourite hill, Somló. (Best wines there.) but i still have some things to do and it will be quite late to start off there by the time i've finished.

2008.08.23. & 24. I was planning the defloration of the graticule lat.47 lon.17 with a nice weekend trip from one hashpoint to the other, but the evil Weather and Job intervened. These days are hard at work anyways.

This user earned the Abduction achievement
by abducting Thepiguy from the (47, 19) geohash on 2009-07-11.
Retrieved from "https://geohashing.site/index.php?title=User:Tomtom&oldid=827944"
Categories:
This page was last edited on 18 January 2022, at 19:27.
Privacy policy
About Geohashing
Disclaimers