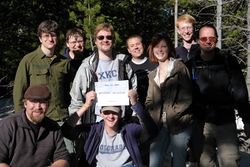 The Fort Collins coordinates (40.126648°,-105.547534°) were reached by many people. It was in the Roosevelt National Forest (at the edge of the Indian Peaks Wilderness) at an altitude of 9,610 feet. Snow made the trail difficult to navigate.

We left the parking lot meeting place at about 4:10pm and made our way up the trail. We met up with some other geohashers that were coming down from the geohash point. Half of them joined us to return to the point. While at the location, we played Twister, chess, built miniature snowmen as markers and took a group photo.

Geohashers that made it: (11 total)