Near the Washougal River, but folks went the Oneonta Gorge on the Oregon side of the Columbia instead 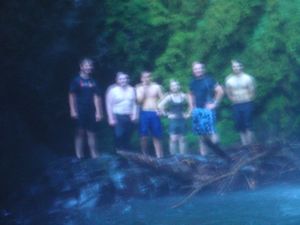 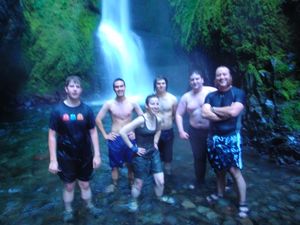 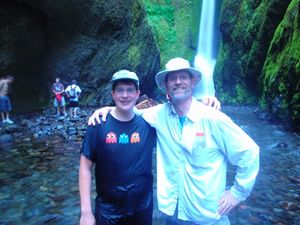 The blurriness of the pictures here were completely not the fault of the cameraman (the seventh geohasher who was, probably wisely, unwilling to swim out to the ledge.) The air in the immediate area of the waterfall was full of a fine, cold mist which was drawn to the lens like a magnet. Yes, a water magnet, smartypants.

Pictures are up! Also, see my user page for information on the full gallery!

It's pretty close to Oneonta Gorge, so I propose we meet at the Gorge and travel upstream as far as we can. I've dragged the marker on the reference implementation to the proposed Gorge meetup spot. (It's the blue marker.) I'll be there, of course, and I'll be bringing at least one friend. If you come, be prepared to get at least your feet wet (river sandals strongly suggested) and possibly more (slippery rocks in the gorge.) UPDATE: I'm likely going earlier than the official 4pm time, probably showing up at noon or so to explore the gorge early. I'll head back out and be back at the parking area in time for the official meetup, though. Bug repellent may be a good idea; I got gnawed on a bit out there last Sunday. Wil 18:00, 11 July 2008 (UTC)

It seems someone planned a surprise birthday dinner for my father without informing anyone. So since I'm the only one who had plans, its going ahead as... planned which means I kinda have to be there. As much as I was looking forward to wading into the gorge I'll have to skip out on this one. Jhon 17:10, 12 July 2008 (UTC)

Maggie: I am so there.