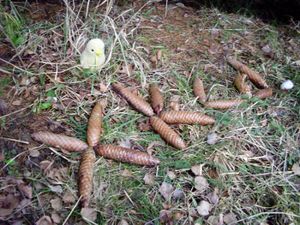 The hash was north of Copenhagen, near Helsinge, and was located on an accessible piece of farmstead-ish property.

This was their first Geo Hashing accomplishment.

We set out from Copenhagen at 2 PM and went by bus and train to a small town app. 4 km from the hashpoint. The town was called Kagerup which in English would roughly translate to Cakeville. This had gotten our expectations way up in advance, and we weren't let down. Granted, no cake was offered to us or magically hung about on the trees just waiting to be plucked and eaten, but the town had plenty of fascinating experiences to offer.

The first sight that met us was an old, decrepit, half-abandoned sawmill. Words can't quite convey the sense of history past and stories untold that hung about this place.

Moving on, we soon came upon a deer farm where maybe 30 animals were gathered in one end of their paddock. A few deer were curious and tame enough to approach the fence to smell us and nibble at our fingers. So we petted them and took pictures of them, all the while being watched by two wary males in the flock.

From there, the trek took us through fields, past a lake and small creeks, and we were continuously dazzled by subtle yet charming details in our surroundings, such as a tree decorated with two orange washing-up brushes. We got occupied and sidetracked so often that we didn't make it to the location until around 4:15 PM. We hope no one else was there and left before we got a chance to meet them.

The hash point itself was at a treeline next to an empty enclosure and what we deemed to be an indoor riding ground in addition to a few houses. We located the precise spot as well as we could with only the use of a print-out from Google Maps (none of us owning a GPS of any kind) and gathered pine cones to mark the spot. A girl exited the riding ground with her horse and spotted us as she went past. When she asked who we were, we merely replied that we were on an outing. She seemed to accept this well enough and moved on. We sat down to eat a few snacks and play a game of Yatzy. That was when a man, apparently the owner of the place, discovered us. He was a bit more skeptical than the girl, but let us stay and do our thing - as long as we didn't spend the night! None of us trusted ourselves to actually try to explain the whole thing without breaking out laughing, so our short answers must have left the poor guy rather perplexed as to what on earth we were doing there.

Unfortunately our Yatzy game was interrupted prematurely by some dogs that came up to a fence nearby and started barking at us. After a while we deemed it best to abandon the post and head back instead of agitating the dogs any further and forcing the locals to listen to the loud barking.

Despite having to leave the hash sooner than planned, the whole thing was extremely successful, and we absolutely loved exploring this little, random piece of the world that we had been brought to.