We checked the Atlanta coordinates in the morning, and to our delight they were on a residential street, about half an hour from downtown. Finally, after an entire week of bad locations. We planned to hit up the point at 4:00. We went to the World of Coca Cola to pass the time and played some Rock Band in Nick's loft. After some delay, we left his loft at 4:00. The following exchange took place in the elevator:

Chris: So I guess this'll just be another land geohash.
Nick: Yeah, I guess.
Chris: And speed-racer.
(pause)
Nick: Want to go at midnight?
Chris: Yes!


At this point we had reached the ground floor. Everyone else got out. We started back up to Nick's loft.

Nick: So what do you want to do now?
Chris: Want to check the other graticules?
Nick: Yeah, okay.


We got back out of the elevator and into Nick's loft. A quick check to the Map lookup found this beautiful hashpoint in the graticule due West of Atlanta, the Anniston, Alabama graticule. The point was about a mile from I20. We could get most of the way there at Interstate speed, and the last quarter mile would be a hike into some woods. Perfect. It puts the 'spontaneous' into "spontaneous adventure generator".

After all that planning, we left Nick's loft around 4:05. Minor traffic heading out of downtown and some idiot drivers slowed us down, but we were out of our graticule and approaching the hash by 5:15. We approximated the spot on the road to pull over as best we could, and were looking into some woods with 0.33 miles yet to go. We left the car and struck out on foot with our GPS and camera. Thankfully there was a trail that led in the general direction that the GPS was pointing us, so we figured we could go ahead and jog out to the point. For some reason, maybe the 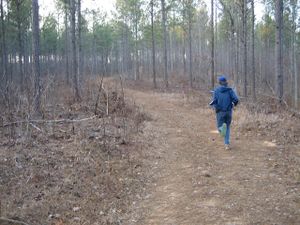 geohashing Gods smiling down, the trail seemed to have all the right twists and turns, as if specially prepared for us to reach the hash. A third of a mile into the woods and that trail took us to within about 50 feet. The last bit was easy, and Chris did some stumbling around to finally find the point.

Success! We took our pictures and took extra care in photographing the GPS. This time the distance remaining and current location can be read clearly. We jogged back to the car with a little more bounce in our step, but that bounce was about cancelled out by the energy it took to jog out to the point, so we were actually still jogging at the same speed. But it felt faster. We finally made it back to the car and headed back to town. Virgin Graticule, level one Minesweeper, and land achievements were already in the bag. But for the multihash, midnight speed-racer we still needed to get back to town and to the Atlanta coordinates.