The day's coordinates fell (surprise!) in the middle of an old corn field just east of I-57 and a few miles north of Manteno, IL. This was the first stop of the day for Nathan, who completed two hashes for the day and earned his second Double-Hash Multihash Achievement. Today also added two more surrounding graticules for Nathan's Minesweeper Geohash Achievement. 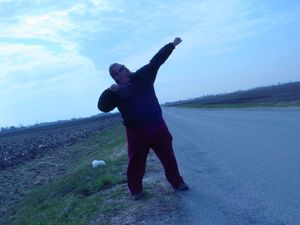 Nathan left Urbana at about 2:40 local time Friday afternoon. After driving north along Interstate 57 for more than an hour, he got off the interstate at Manteno, IL. After a short drive through town, Nathan was continuing north of town along some small county roads, finally arriving at the point in the road closest to the day's hash location. However, according to the GPS unit, Nathan still had about three tenths of a mile to go on foot.

Nathan made out his marker flag, using one of the flags that his friend Brett generously gave him (Thanks, Brett!). Nathan then changed his shoes (as is quickly becoming his custom) when he saw the field that he had to traverse. Then taking the marker flag, his camera, and the GPS unit, Nathan set off to the north to get to the hash point coordinates. He was relieved when the field was solid and easy to walk on--but he still had three tenths of a mile to walk.

When he arrived at the point, Nathan was surprised just how close he was to I-57--it was easily within sight as he could see cars and big rigs driving up and down the interstate to the west of his location. Looking around, he saw one homestead to the east, but the closest homestead was to the southeast of the coordinates. He was not discovered by anybody or, if he was, no one confronted him about what it was he was doing out in the old corn field.

After taking a quick look around, Nathan confirmed that he was at the exact coordinates (as exact as his GPS would allow him to be) and took note of the time that he arrived. He took a few more pictures of himself, the marker flag, and the GPS unit.

After taking his pictures and taking in his surroundings once more, Nathan turned (taking a picture back at his car to the south) and started trudging back to the county road where his car was waiting for him, flashers blinking. When he arrived, he took a celebratory pose of his accomplishment and got back in his car, ready to go home.

But just as Nathan was about to leave, he had a thought. To continue along on Nathan's journey, click here.