In the mountains west of Westsyde Rd, up the west side of the North Thompson River, north of Kamloops.

Turn off Westsyde Rd onto Jamieson Creek FSR, follow the roads in a complete loop around the hash point, going through at least 11 intersections in the logging road network which must be correctly navigated in order to not get lost, before hiking the last 250m or so through forest. At least Google says the terrain is fairly flat here.

Before setting off, Rhonda's mom carefully traced the planned route through the logging road network on google maps, zooming in on each intersection and recording the co-ordinates and correct turn direction for each one. These were all programmed into the GPS, and a google map printout that showed the logging roads and had our route marked on it in red was prepared.

We drove across town in Rhonda's mom's red jeep, and found Jamieson Creek FSR easily. Then, we turned on the jeep's GPS and told it to navigate to intersection #1. Rhonda's GPS was tracking the distance to the hash point the whole time.

With less than 100m to go to intersection #1, we saw two roads ahead of us, and consulted the notes. Go left. So we did, and re-set the GPS to go to intersection #2. At #3, it said to turn left, and there was a 4x4 track to the left, with a ditch at the entrance that sent a clear message: don't try this road unless you can get through this ditch! Rhonda's car had got stuck in a smaller ditch, but this was the jeep!

We bumped through the ditch with no problem at all, and headed up the track. The GPS showed us heading away from intersection #4, so we stopped, consulted GPS and map and logic, and concluded that it should have been our other left. There was a spot in the road plenty wide enough to turn around in, so we did, and backtracked through the ditch and back on to the main road, which took us directly to intersection #4. The rest were pretty clear, although we did confirm with the map, and before long we had passed intersection #11, having made a circuit all the way around the point while staying roughly 2-4km away the whole time. The next point was labelled "start hike" and was the FSR's closest approach to the hash point.

Conveniently enough, there was a suitable spot to park the jeep just off the road, and we gathered GPS, camera, apples, and Sophie together and headed into an even more convenient skidder track that was heading right for the hash point. 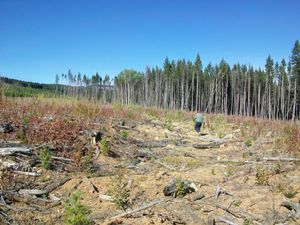 Not 50m in, we realized that while google maps had been correct about the mostly flat terrain, it was sadly out of date in one key aspect. There was no forest at the hash point. This was a fairly fresh cutblock; the baby pines were thinly scattered and only knee high. Mostly it was grasses, thistles, and bleached-white slash. Rhonda pointed out that it could have been worse; if google maps had shown a fresh cutblock, this area would have been all 3m high young trees and mature underbrush, dense and impassable.

The skidder track led us to within about 60m of the hash point, then we turned off and cut through the developing underbrush. We found the hash point, took some pictures, completely forgot to make an xkcd marker, and hiked back to the skidder track and back to the jeep. We followed the intersection points in reverse order until we reached pavement, and then headed home.

To come. Must figure it out.