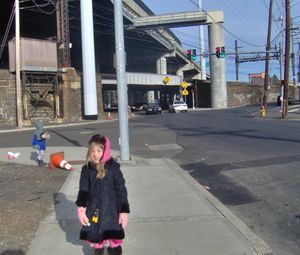 On the sidewalk in a residential neighborhood in Bridgeport, CT, right next to the highway.

Sara and her daughter and son.

My plan was to go to the Children's Garbage Museum in Stratford, CT today and to geohash somewhere on the way. At hash-o-clock, I was surprised to learn that the hashpoint was only a few km from the museum.

The children behaved excellently in the car - they used coloring books and played travel bingo. We found the hashpoint easily, took some pictures and went on to the Children's Garbage Museum, then drove home, stopping at a restaurant.

And then we went to the Children's Garbage Museum in Stratford, CT, right near the hashpoint. I found it fascinating, but I would not have had the guts to go there without kids. Thus, I discovered one of the main advantages of bringing children when you geohash.