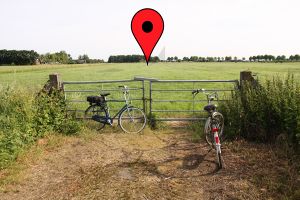 In a piece of farmland just south of a highway near Bunnik.

We'll go there by bike after dinner. A Tron hash might be possible for CO2. We don't have a GPS device available so we'll have to do that the old way. Printed a small map + Google-Earth air photo overview, and that was about it.

After deciding this occasion was too good to let slip, we left the univ we were supposed to work, and headed out for dinner. Yep, that's right. Food comes first, hashing can wait. Once our stomachs were satisfied, we took our bikes, made a small detour (TRON award), and headed south. After passing the locally famous pancake restaurant (hey, we knew what we were doing when grabbing dinner back there), the local youth hostel, and a very busy road, we managed to get across the highway, and continued our trip. Finding the field wasn't hard, waving at the nearby traffic jam was even easier, and more fun :) The next part was deciding whether to cross the fence or not. Since nothing forbade trespassing, we went for it, scaring a bunny (see picture) in the process. The actual #. was nice and green in the evening light, so after the obligatory pictures, we left Bugs to his own devices. Travelling along the highway, we made it to the town/village/collection of houses of Bunnik, and headed back home. Since the maps indicated a nice little road where there was none, CO2 almost screwed his TRON, and had to stick to the right side of the road ;)

For reading this report, it will be easy if you keep the Tron achievement track nearby. For the first part of the route, I left my home early in the morning for going to the university like usually. I have been working there till 5pm and by then Freeze and I had made some plans. We left at 5 pm and went to the university restaurant to gather some solid energy first, hence the weird curve in that part of the Tron track. Then we went into the forested area just south of the campus and we rode past Rhijnauwen, a fort of the Hollandse Waterlinie. Not much was visible from this side, but I know that after the military left, that place started housing some unique animals and plants. :) Then we passed the wooden (so it could be shot down by a cannon in case of a war) pancake restaurant, called Rhijnauwen, in which I once received a pancake with a metal screw in. Don't ever go there. Really. Don't. Anyway, just after that we passed a small castle, also called Rhijnauwen.

Then we got out of the small forest and had to cross some roads to get close to the actual hashpoint. It was in some grassland, and sadly we were stopped by a gate closed off with a locked chain. However, there weren't any signs saying we weren't allowed to enter and there was no farmer or anything to stop us, so we decided to climb the low gate. We chased away a bunny that was apparently guarding the hashpoint with its life, as it came back to the spot the moment we left. After making some more pictures, we continued our route past the other side of the village Bunnik and back to Zeist. After we took a left just beyond the little river, we found out that the little road visible on google air photos was only a walking path and it wasn't allowed to bring bikes there. We decided that after climbing the gate we shouldn't do any other semi-legal stuff. Turning around wasn't an option as that would invalidate the Tron achievement, so we continued till we got back on the route I used in the morning. I made sure to stay on the right side of the road and that way did not break my Tron track. The first and last parts of Freeze_XJ's route are different because he lives elsewhere. This made it impossible for him to also claim the Tron achievement.