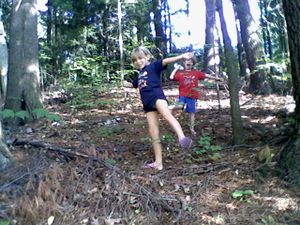 On the side of a suburban road in Westfield, Massachusetts

Sara with her son and daughter

Although, as you may notice from the photos, the children chose to be "t-shirt twins" this afternoon, a conflict began in the car on the way to the Westfield, and by the time we parked near the hashpoint and started walking down the street, they complained that it was too hot and their feet hurt, etc. As soon as I figured out that the hashpint was a little ways off the side of the street in the trees, their eyes lit up "Do we get to go into the woods?" and they eagerly walked three or five meters or into the trees until we found the hashpoint. Then, in an improved mood, they made markers, and then we drove home.

On the way to and from the hashpoint, we saw "Terriers around Town" in West Springfield, which is like a "cow parade" but with dogs.