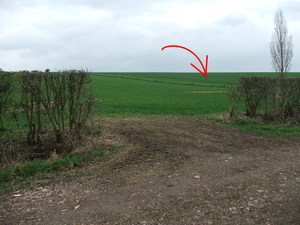 In a field near Askham, close to Markham Moore TI (junction of A1 and A57).

Monty plans to at least travel to one side or other of the field involved.

On the north side is Hawksley Lane, leading only to ??Hawksley Farm??, and maybe the owners of the field reside there, but there's another row of fields along this side.

On the south (or south west) side of the field is a track that actually does run along the required field-boundary, appears to do a loop around and reconnect with the 'main' road and is also opposite (if not a continuation of) Wood Lane which is a Public Bridleway, so this'll probably be the one first visited for at least a first look.

Neither lane appears to have been travelled by the Google Car, only the Upton Hill one passing through nearby Askham, so a lot of the above is speculation based on on-line overheads and a judicious review of OS maps.

If Monty is setting off from home (Sheffield) at shortly after 10am, which depends a lot on many other factors (including "Why am I still awake and thus writing this at 4:45am?"), he may be in the area for about 11:30 or so, even with bad Saturday traffic. However, as his main reason to be in this graticule today is because of needing to up at Hatfield (east of Doncaster) by 1pm at the latest, this trip may be deferred until late afternoon, if time and daylight still permits. If there's anyone else in the area, you're welcome to make your own way in your own time and maybe there will be a multi-person meet, or maybe not.

Access to the spot will depend upon conditions on the day. Without a GPS there's less value to actually tramping to an approximation of the exact spot, which may also be dependant upon the state of the field (e.g. not currently under crop) and opportunity to gain permission of some kind, so it's debatable whether this will ever become a Coordinates Reached expedition, but worth a try.

Perhaps if one can actually throw a stone to within a gnat's minim of the spot (gonna be hard, all evidence suggests it's on an uphill rise from the southern hedge boundary) it'll be scored as a hit, although Monty rejected that logic (and/or didn't think he could throw far enough) when it came to 2011-03-27 53 -1, the previous weekend... :)

Starting a little later than anticipated, the journey down from Sheffield was uneventful, going down the M1 until j31 with the A57 (mostly for time reasons, as a quicker route would have been to have joined the A57 in Sheffield itself). About the only landscape feature of note was the huge wind turbine in the grounds of the B&Q depot off the Worksop by-pass. It had been a few years since Monty had passed that way, and this was a definitely new addition to the scenery. It first hoved into view quite a way back around the by-pass, and was surprisingly large. (In general, Monty is for wind-farms, and likes the look of them, but must admit that this one was startlingly huge.)

While tempted to retro-visit the site of the 2011-03-25 53 -1 geohash, in Clumber Park, time still pressed, and so onwards he want to the A1 at Five Lanes End, and south towards Markham Moor. Having been only the second time visiting 5LE, since the A1 road remodelling, and the first time for Markham, he's shocked at how motorway-like this once popular Time Trialling road has become.

Off onto the Retford Road, right towards Askham and then left at the village itself led to the track, an apparent continuation of Wood Lane. There were no obvious Private signs, although a warning that the rural version of Neighbourhood Watch was in action. Considering the rutted, albeit dry, surface of the track, and the mindfulness that it was at best a RUPP (Road Used as Public Path), although not even signed as Footpath/Bridleway (despite obvious signs of horseshoe marks), it was thought best to walk down the trail rather than drive. (Of course, that included forgetting to take the tripod, for self-photos, and even the giant alarm-clock was left in the car, so no visual indicator of time and date. Darn. Still, never mind.)

Off to the left were a number of fields, the boundaries being easy to compare against the overheads printed out and brought along. To the right, a stream led into a series of ponds, partially visible through the hedge. The ponds were intended for at least waterfowl, from the looks of some shed-like structures and the sounds and short glimpses of a number of birds of that kind, but may also have been a local fishing spot.

It was notable that most of the fields, opposite the stream-side, had no gateways. In some ways this was less reassuring, as it meant that there was an implicit assumption that anyone on this track was unlikely to be a member of the public. The same was true of the field quickly identified as containing the geohash point. Monty wasn't going to threaten the part-grown crop upon it (at that point in time, indistinguishable from a thick-bladed grass monoculture), but there were some tractor tyre-tracks leading upwards. Without GPS at hand, there was going to be no indication of exact displacement from the target position, but reckoning that his own reckoning would have to do, it didn't seem to be a problem to follow a rut up the rise of the field.

There were some land-marks (trees, field corners, etc) visible to do some basic cross-checking with the overhead image brought along, although the photos taken were dreadfully featureless and devoid of much other interest. (The panorama shot didn't even stitch well. The one at the field entrance was bad enough, but included in the gallery, below, anyway.) However, give or take a few dozen metres or so, Monty reckoned he'd achieved the aim of the day in as non-invasive way as he could. (With a GPS, there might have been a need to cut across the farmed land, which could have been done with minimal disruption, but without a definite target in mind there was no point. Experimentally, a small pebble (already nestling beneath a plant) was lobbed over and beyond the estimated target point, so it can be truly said that this was within a stone's throw!)

Retracing, a small heart-palpitation of anxiety occurred upon seeing a 4x4 parked upon the lane by the fowlery/fishery entrance, but the driver paid no real heed to the lone geohasher and disappeared through the gate into the ponds area. Indeed, when the 4x4 drove back out again, as Monty was re-stowing his gear in his own car a few minutes later, a short nodded acknowledgement/greeting was the limit of the communication forthcoming through the windscreen.

The success (albeit a qualified one) meant that there was no need to investigate Hawksley Lane, the farm track further up Town Street. Passing it, there was a more visible sense of private road, anyhow, as befits a track that maps had shown to purely lead towards a farm (most likely Hawksley Farm) and onwards only as further field access. And time was getting on for Monty, who had to get through Retford (very traffic-heavy, but then it was a traditional market town on primary routes both across and parallel to the A1) and Bawtry (also a little busy) and make his way up to Hatfield. Which he commenced to do. All else that happened that day was largely irrelevant, although without the commitment it would have been quite possible to have travelled over to Buxton to try to grab the 53 -1 geohash point as well (initially surveyed as almost at the side of the road). Maybe another weekend.

(In fact, prior to finally posting this, just checked. Today, when going east to west, because of the Greenwich Meridian flip, 53 +0/Skegness puts us in the sea ('de-flipping' would have set us down in a field near Haugh), here it's the aforementioned field, 53, -1/Sheffield in an accessible bit of Buxton, 53, -2/manchester on a small triangle of public grass in Elsmere Port, 53 -3/Blackpool in open countryside (unknown regarding public access), only stopping at 53 -4/Anglesey where it's off the coast of Anglesey itself. I could imagine a set of 53 -4..53 +0 hashpoints for a full-on coast-to-coast traversal. It would need to be a low fractional longitude in each, and also low fractional latitude in order not to be heading off the north coast of Wales or into the sea beyond the Humber, of course. Must try to keep an eye out for a good combo at a time I can make a full day's travel. Although other latitudes could give even more, this would be easiest for me.)

Monty is a No Batteries guy, still, so no logs from him.