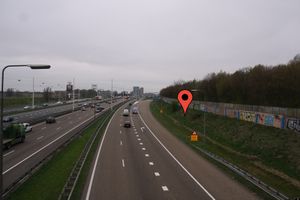 In a park in the city of Utrecht. Probably not reachable because it is JUST beyond the highway fence. But we may try anyway.

Puppetmaster-wannabe Shevek tries to get a friend to go there.

CO2 and Freeze_XJ may go that way at well. Shevek, can we plan a meet-up?

I met up with Freeze_XJ and together we cycled towards the hashpoint. We planned to meet with the two other guys (Tchakkazulu and TheOtherGuy) on the bridge over the highway close to the location. We arrived slightly early so Freeze and I took a footpath to survey the area in the park behind the highway wall. We found out that there was a sort of canal between the path and the actual wall, so the only way to get there was to climb down to the wall from the bridge. We decided to wait for the others at the bridge. They arrived a short time later.

Then we climbed and crawled and wrestled through the bushes and the steep sideways slope next to the wall until we got as close to the hash as we could. This was probably the most adventurous hash I attempted so far. We knew it's illegal to actually go to the other side of the wall and walk next to the highway, so we called it 'as close as we can get' and walked back to the bridge.

The four of us decided to stay there for a while, sit down on a bench, and talk. About half an hour later, to our great surprise, three strangers (called Mennoowh, Eva and Wouter, apparently; red.) appeared on bikes. They put down their bikes, walked to the bridge, got out a GPS, and pointed right at the hashpoint. Of course we went up to them to say hi. Apparently, they were geocachers who found out this hash was within their city and close to a cache as well, so they obviously had to reach it. They didn't seem to care much about the law and climbed down from the bridge to the highway side to the wall. They were joined by Freeze_XJ, while me and the others decided to 'stand guard' on the bridge. Freeze_XJ and the strangers probably reached the exact hashpoint while me and the others got within the uncertainty range but on the wrong side of the barrier.

Reached or not? Legally or not? Does it count for all of us? It all depends on your interpretation of the rules. I frankly don't care, it was a fun geohash and that's all that matters.

In any case, the three strangers left very quickly to go get their cache, and after a bit we went off as well. Freeze_XJ and me got something to eat in town, then Freeze_XJ went off to catch some geocaches in another part of the city, while I went home.

Yep we reached the zero, both on a slightly different spot (inaccuracies FTW!), and made it back safely. It seems that geocachers are slowly making the step towards hashing, which might be logical. I mean, you're weird enough to go looking for a small piece of paper to put your name on, so why not virtualize it all? (EarthCaches spring to mind) As for me, it doesn't matter much what I'm hunting, as long as it keeps me active ;) Today certainly was active enough, the pictures may tell you something.

While discussing automated geohash bookmarks on facebook with Wijnland (and another geohashing friend with an as of yet unknown username), I realized it would be a waste not to visit today's hash as it was easily within cycling distance. So I summoned up two friends (Wouter and Eva) and convinced them to come (thereby getting myself the Drag-along achievement, muahaha).

When arriving near the location, we saw 4 suspective individuals sitting on a bench, on which we remarked that they didn't quite look like local youth hanging around. When I took out my GPS and we looked and discussed how we should get there (see Freeze-XJ's first photo), the 4 bench-guys came running towards us claiming to be hashers as well. They told us they tried to get there from the non-highway side and succeeded to get to within a few meters of the hashpoint, but not quite there. We felt we didn't want to put off by that so we and Freeze_XJ took a small walk along the barrier (hoping to avoid a Police Achievement) and reached the point just below the barrier, in clear view of the highway.

After a chat with the 4 friendly geohashing strangers we took off to find nearby geocache GC1QR79. Here we spent some time watching a heron eat a frog or a salamander and then cycled home after our first instant-geohashing-adventure!

The Thursday before, I was poked by Shevek, who asked if I had something to do on Friday. Sadly, I already had an appointment with a friend (TheOtherGuy) to work on some project, so I had to decline. However, when Shevek said it was geohashing, there was a chance I could get said friend, who just happened to be my geocaching buddy, to join as well. Minutes later, I joined the IRC channel, and tried to get a meetup going with CO2 and Freeze_XJ, but not knowing yet if TheOtherGuy is interested (and if not, I wouldn't be going either), nothing concrete was planned.

On Friday itself, I met with TheOtherGuy to work on the project, and I mentioned the geohashing expedition. He was cool with it, and we decided to meet with CO2 and Freeze_XJ at the bridge crossing the highway. We took a bus from the university campus, and walked a short bit to the meet-up location. The rest has already been described by the others.

For city dwellers like us, this comes close to a MNIMB achievement, but meh. Perhaps the others that visited this hash feel they can claim other achievements. Well, go right ahead.