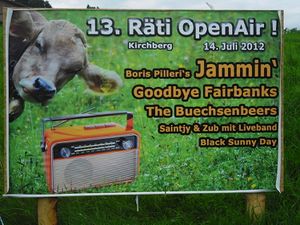 Catch train to Wil sometime in the morning, then walk.

Since the graticule of Sankt Gallen hadn't been visited for some time and the hashpont for the day lay way out West, Calamus decided to go to his eastern neighbouring graticule for a change. This was the very only reason. It had nothing to do with the fact that the corresponding point in his home graticule was close to Aarau, capital of Argovia, because Calamus most certainly didn't suffer from a horrible fear of Argovians, no matter how well or badly they drove.

As he left the train station at 8:30 a.m., the graticule greeted Calamus with some mild rain. After getting his bearings, he made his way south out of the nice town of Wil. He walked along the peaceful path, leading partly through the canton of St. Gallen and partly through Thurgovia, until he reached the village of Wolfikon, which Calamus thought sounded like a convention for furries. The point was part of a field which was fenced off, but the farmer kindly allowed him to it in what sounded very Thurgovian, which wasn't surprising due to the proximity to the border.

He wasn't the first one to make this hash. It turned out the graticule wasn't derelict after all, quite the reverse in fact. But all of its geohashers had no wiki account and were also cows. They had no PGP keys to sign, either.

So Calamus took his leave. He briefly considered waiting for the bus (which left exactly once an hour on Sundays this far out), but decided to walk back, this time through the forest (with at least ten fords).

When he arrived back in Zurich, it was about noon. The departure table showed a train to Aarau, and as he didn't have any appointments until late afternoon, he spontaneously decided to board it.

It is virtually impossible to make a cow-less picture in this graticule.