In Espoo, Nuottaniemi harbour. Challenging weather, but easy place to reach. The hashpoint lies in a greenery patch (which is of course covered by snow this time of year) surrounded by bicycle roads.

Tilley: I noticed this hashpoint was only about 1 km from my brother's home! (This was another brother than the one who reached the 2012-10-11 60 24 hashpoint.) I definitely should get him to visit it despite the heavy snowfall in the area in recent days, about -10°C temperature and only few hours of sunlight this time of year: quite an arctic hash despite being in the very south edge of Finland. 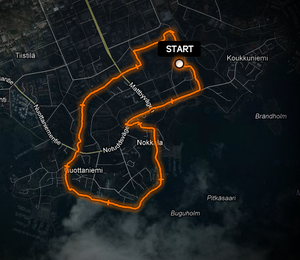 I contacted my brother, who seemed willing to go. The place was alongside a route they sometimes take for evening walks, my next question of course being, did he have pictures of the place. :) Sadly he didn't, which meant no (provable) dejavu hash this time.

I instructed him to bring a thermometer, look for any trash nearby, try not to walk he's own tracks when getting there and back again, and bake a pie to bring with him and offer it to strangers walking nearby. :) Ok, so I'm a bit addicted to achievements, but who geohasher isn't? Unfortunately he didn't have time to bake a pie, and returned my feet to the ground by noting that it would be unlikely that any passerby would accept the pie even if offered. 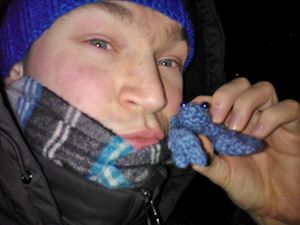 So after a hard Monday day's work it was already dark, but my brother courageously set out to the snow storm amongst the howling wolves, bringing his wife with him for protection. Well, only part of the above sentence was true, but there _have_ sometimes been wolves spotted even in the city of Espoo, the second largest city of Finland. Ok, so they just walked all the way to the hashpoint. It was cold, and they had to trudge through the 30 cm of snow a bit longer than necessary to avoid backtracking. They didn't find a thermometer to bring along, but from the measurements of the Finnish meteorological institute the temperature in a wide area around the hashpoint was definitely below zero for many hours before and after the trip, temperature being about -7°C. So there should be no question about the Frozen hash. 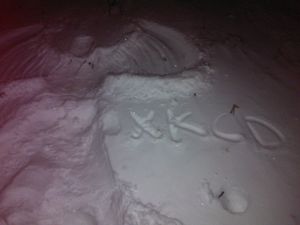 Hashpoint was found easily, and they made a snow angel and wrote 'xkcd' to the snow at the spot, took a picture with hashcot, the Lobster and sped along to avoid freezing. They actually saw one dog-walker near the hashpoint, but unfortunately didn't have the pie..