The temperature was about -20 C.

The plan was to walk from home to hash, trough Yasenevo and Butovskiy forest park, then get to the nearest Metro station in South Butovo. But when I reached Butovo, I didn't feel tired yet, nor too cold, and I decided to walk back home too, thus passing by the border of South and North Butovo, through Bitsevskiy forest park and Yasenevo again, completing Tron cycle.

Left home with a pack of gummy bears in the pocket, flask of hot coffee, balaklava and geohashing marker in the backpack.

Thermometer outside the window was showing -8, web sites -21C for Moscow in general. Thermometer was on the sunny side, and near the building. When the sun moved more in the direction of the sunset mom phoned me to tell that it was -18 on the thermometer, which is still near the building so I guess web sites were correct.

However there were almost no wind, and it didn't feel that cold at all. Balaklava wasn't needed.

Parts in the parks were easy - trails are cleared for skiing, and the forest shields from the wind.

The most complicated part - by the road between South and North Butovo. Sidewalks are not cleared from snow, and since there's not much people walking there, there's no trails of compressed snow as in the parks. And no trees to shelter from the wind.

Now, the tracklog. White markers indicate places where it shows some funny things like me crossing the street back and forth, or moving 213 km/h - didn't happen. Red pin - switched the tracking phone off to save battery life since it told me that it is almost discharged. Green pin - switched it back on. The trail is essentially straing between these points. Switched off Wi-Fi and GPRS though (pity that I haven't sought of it earlier). Surprisingly batteries lasted trough the most of my journey, despite the indicator showing no charge at all. To record last couple km in Yasenevo I had to return and retrace my steps a couple of days later.

Luckily phone was still working when I wondered trough the open gates of new Metro station construction site. Had to get over the fence to leave it without breaking Tron constraint. That would be hard to retrace. 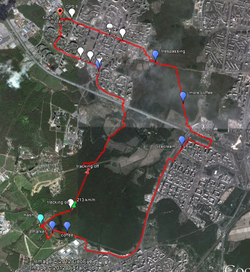