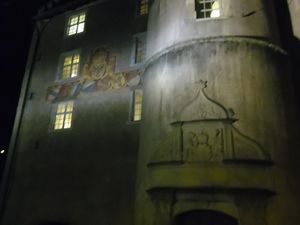 Zürich, Switzerland is currently in a hashclash with München, Germany. The clash will be won by the graticule to report more successful expeditions during January 2013.
You are free to side with one of the graticules and motivate it by cheering it on - or to demotivate the other one. Progress can be tracked here.

Next to the museum of Ennetbaden

That one's a gift. It's almost right over the bridge from Baden station.

Taking the IR train from Zurich at 7.06pm to be in Baden at at 7.21, then cross the bridge. If Chris finds the time to join, celebrate the victory over München in a pub and maybe have dinner.

The outcome of the hashclash had been written. There was no way for München to equal Zürich's expedition count anymore. To match, the hashpoint fell right into the center of a major town on the last day of January, close to a restaurant, allowing for celebration. It was also the same town where Calamus had experienced his only failure in his home graticule, meaning he had some unfinished business there. What could have been better?

Calamus arrived in Baden according to his schedule. A rather tall glass elevator took him down from the station to the river he needed to cross, which he did. From there, it was a short walk to the hashpoint. Just when he realized that he wasn't getting a clear satellite signal due to the buildings around, Chris showed up, whom he know to have better reception. After a brief search, they homed the hashpoint in the middle of the sparsely used road, took their pictures and placed another one of Chris's hand-drawn markers.

As the point lay next to a Chinese restaurant, they decided to have a drink (like they had every time they met) as well as a little food. The restaurant was only slightly overdecorated and looked quite classy. The waitress assigned them a table (they were the only guests) and, after a glance at Calamus's hair, which he'd had cut recently, but still was long by most people's standards, lighted a single candle, an action to which neither of them reacted.

Since neither of them was very hungry, they just had a tasty chicken-and-noodle soup, as well as some Chinese beer, which Calamus hadn't even heard of, but liked right from the start. After a pleasant conversation on Jurassic Park, forced internationality in Korean companies and, of course, the clash with München, they returned to the station and to their respective hometowns.

This was the end of the January series, during which Zürich, partially incited by München's competiton, had managed to reach no less than ten hashpoints, almost double their previous record.