On May Day the year 1968 Pastori had first date with his future Wife. His buddy had a really big american car, a Ford Galaxy from mid-1960s. They cruised around about 40 km that day and began their 45 years of life journey together. After that, they have every May Day made some kind of road trip. And what would be better way to do a trip than to look for geohashpoints like they mean it. The purpose of their trip now was also to visit The Wife's sister, who lives 185 km away.

On this May Day road trip they drove 400 km and scored three hashpoints. This is the first. 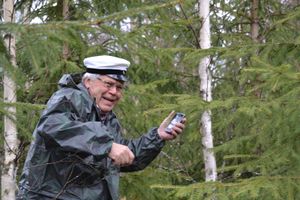 Pastori vs. the forest!

The first point was in the Nurmes, or 63,29 -graticule, in the village Salmenkylä. The point was easily reachable, from home about 37 km and from road only 200 meters. There was some mixed forest and small birch trees. The terrain was relatively open, so they could locate the hashpoint precisely. 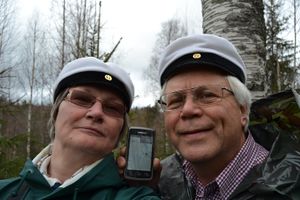 Weather was moist and rainy, so they managed to cope with light rain gear, i.e. rain jackets and Nokia rubber boots (yes, Nokia has manufactured rubber boots long before cell phones). Note the white Student caps. They are part of Finnish May Day celebration and thus we had them on on today's geohashingdatecruise.