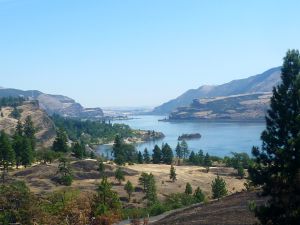 Uphill from Old Highway 8 on the Washington side of the Columbia Gorge.

Heading east out of Portland, I spaced out and took the Bridge of the Gods rather than the Hood River Bridge to the Washington side, which kept me in relatively slow Highway 14 traffic for an extra 20 miles. No worries. Old Highway 8, once I got there, was an entertainingly narrow, winding road, probably of 1920s vintage or so. There was a gated turnoff that give me a good place to park, and a convenient track running about 1/3 mile up through recently burnt-over grassland. The whole walk to the hashpoint and back had terrific views of the Columbia Gorge.

Subsequently, I drove a long way and got in a second hashpoint in suburban Boise.