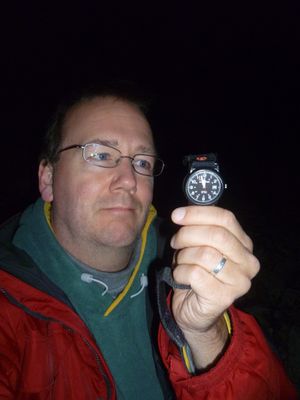 On the shore of the Mississippi in Guttenberg, Iowa.

After 2013-10-26 43 -92, I thought I'd stop by Guttenberg to confirm my suspicion that this one would be either in the river or on an inaccessible protected levee. What I discovered is that, along with a lovely riverside park, the town has twin trails at the top and bottom of the levee both. I got down on the lower trail, and voila! was able to stand at the hashpoint about eight hours before it became the hashpoint. Then, just to keep things surreal, a faux old-style Mississippi Riverboat came around the bend and through the nearby locks.

Since the hashpoint is for reals, I poked around town and found a motel. Then I went for a run on the levee trails, crossing the hashpoint again about six hours before it became the hashpoint. At this writing, it is still about three hours until it becomes the hashpoint.

At a quarter to midnight, I drove back to the hashpoint. I forgot my flashlight, but I was able to get to the point at about 7 minutes to midnight by the silvery glow of my GPS. I sat down and took some pictures and enjoyed the smells and sounds of the great river at night.

At two minutes to midnight, a voice from the upper trail said "Hello? Is somebody down there?" Heh. "Hello!" I said. There was a pause. "Are you fishing?" asked the clearly puzzled voice. And this made me think about how I taught a class a few days ago about how human communication inevitably contains not only information, but also an implicit attitude towards that information. And also about how much I didn't want to try to explain geohashing to an invisible stranger in a shouted midnight conversation during which I was pinned on the shore of a great river, 1500 miles from home.

So, I focused on conveying harmlessness, cheerful confidence, sanity, and goodwill while I called up "Nah! I'm just goofing off!" It seemed to work.

Then midnight arrived and the hashpoint came into being. I enjoyed the moment for a while longer, then headed back to the motel.