I happened to check the location of today's hash and it was just 4.1 km from home. And it was not in the Baltic Sea. I drove to work. In the afternoon I rechecked the coordinates and decided to visit the hash on my way back home. The hash was only some 300 metres off my regular route so it wasn't even a detour. I parked my car 76 meters from the hash and walked there. The final point, according to my garmin, was on the edge of the pavement and not in the street. So the hash was easy to reach when the equipment was stabilized. So finally I managed to reach my first geohash. 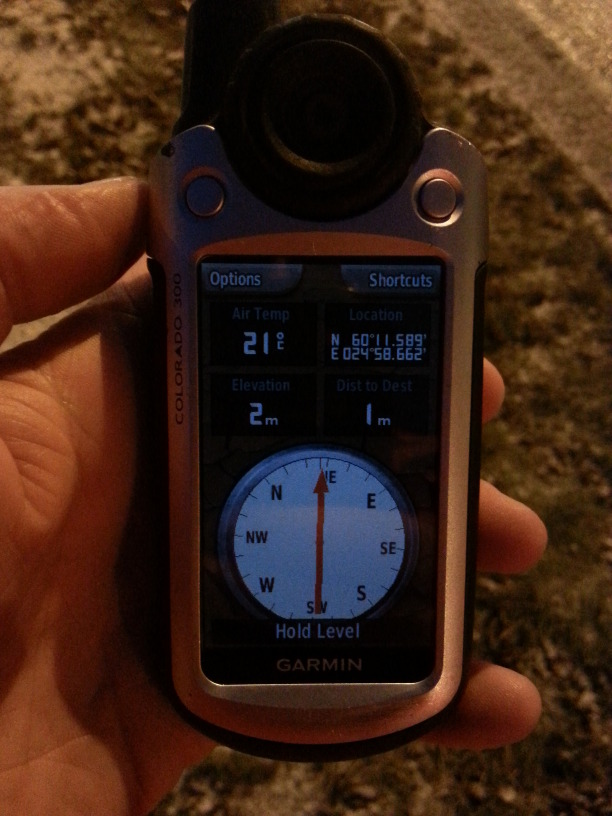 This hashpoint was so close to my school and in such an easy place in general, that I just had to go there. I hadn't been geocaching for some time either, so I was exited about my evening plan. I pointed out the hash to mr11 and while I was geocaching, he told me he was coming there soon. I also had invited UndeadPriest and we met close to the hash.

The hash pointed on the closest lane of the motor road and standing on the sidewalk we were 10 meters away from the geohash at most. Only later I realised we could have also driven a bus through the hashpoint. Gotta try that some other time.

After visiting the hash, we continued geocaching on the nearby area. Mr11 had already found most of the caches, but I hadn't been geocaching here for a while. First we headed to the nearest geocache, Hermanni: Agroksenmäki (http://coord.info/GC4Q798), which was only 117 meters away from the hash.

We then continued the geocaching trip with additional four finds. A geohash, geocaches and great company, what a great way to spend the evening :)