Kuopio, Sorsasalo. The point lies next to Kallansillat (bridges over Lake Kallavesi), in the middle of a group of saplings. 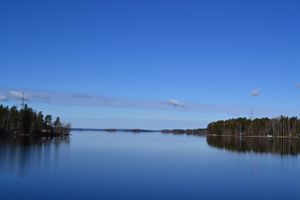 The last passage home of Pastori and Wife's autumn trip took them to the beautiful scenery of Lake Kallavesi in Kuopio, where there seemed to be a reachable hashpoint. They parked the car about 100 metres from the point. Pastori, as he is bound to do, headed straight for the point under a power line but this time his journey stopped in an impenetrable thicket 65 metres in. Pastori thought laconically: ”This isn't going to work.” He went back to the car, but didn't really want to give up yet. Pastori decided to give it another try and went around from the right this time. And lo and behold, he found a much easier path through a group of saplings and he achieved an accuracy of 1,7 metres. Pastori was happy with the result, but wondered if it were easier to think about the route first so he might avoid some thistle thorns, scratches from the thicket and muddy shoes. Maybe next time.

The outcome of their five-day autumn trip: A successful hashpoint on the first and last days, two failed attempts in the middle, meeting all grandchildren and 1540 safely driven kilometres. 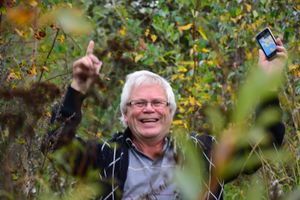 We found the hashpoint after all.