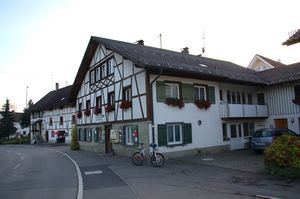 The hash appears to be next to a house in the village Laimnau, Germany.

Judging by the imagery on google the house seems to house a shop and the hash appears to be on the parking spot to the north.

I intend to take my bike to Konstanz, from here the ferry to Meersburg and then bike the rest of the way.

I reached the hash. After a long drive there, and some slight complications.

First thing in the morning I did was go and print out some of the maps that might be useful to me, I also bought some stuff to eat, and made some tea.

I started out in Kreuzlingen at ~12:15, Switzerland and drove to Konstanz like planned. Then I took the ferry to Meersburg without any problems. All in all my drive up to Friedrichshafen was rather mundane, navigation was done with signs up to there.

Here is where things turned a bit more difficult: Laimnau is not really mentioned on any of the signs, so I finally started using the maps. Additionally some of the car routes were "Kraftfahrstrassen" meaning I probably should not go on them with a bicycle (I think it might actually be flat-out illegal to do so). I stopped by a yacht-harbor and whipped out my maps. There was some wedding party in the background getting pictures taken. Here I plotted a course from Friedrichshafen through Eriskirch and Oberdorf where I should pass by some of the tinier collections of houses, Apflau, and then finally reach my destination in Laimnau.

All was well until Oberdorf. Here I for some reason overlooked a bunch of signs pointing me to a bike track and I took the car-road. I eventually reached a bicycle road again, and realised that there had been a bike road all-along. Oops.

Somewhere after that I took a wrong turn. Probably because there was a sign pointing that way reading "Laimnau" and I had not noticed that it was not one of the bike-signs but rather a hiking sign. This ended me up between the river Argen and a cliff, with no more route towards where I wanted to go. I decided to turn around and take a route I had spotted earlier, meaning all the way back through whatever bushes I had come up to here.

Somewhere in the bushes something had punctured my rear tire. I did not take a patchkit with me because my tires are tubeless, so I hoped that the magic fixing fluid in my tire would do it's magic fixing thing and patch the hole. It also seemed like a bad idea to be standing in the middle of nowhere-in-particular with my tire leaking air, so I took off towards the main road instead of the route I spotted earlier which leads to an uncertain path through the forest. At least the main roads would have some cars passing by I could hail or something.

The hole was not particularily big, so the air was not leaving at a dramatic rate, and I managed to find the bike path again. I even managed to find Laimnau ~30 minutes late for the meetup.

The locals don't shy away from talking to strangers. One of them asked me if their unmanned apple stand was really that pretty (I took a picture of it). Another one offered me to take a picture of me with my bike. The same then asked a bunch of questions about where I am from and stuff. Meanwhile the magic-hole-fixing fluid in my tires had done it's work and I was no longer loosing air. Yay.

The return route I chose to do differently. After a bit of navigating, eating and drinking in front of the local church I chose to go through the forest and the city of Tettnang (which I now know that Laimnau is a part of).

There was a 18% incline which I was apparently not supposed to take (or so the signs tell me). Night started to fall and I installed my lights which I had patched up with duct tape and zipties earlier. Outside of being blinded by headlights and being unable to see the road in front of me on several occasions, the rest of the trip was uneventful and boring.

Since I did not use a GPS device I do not have a tracklog, however here is an estimate of the amount of distance I travelled according to google (detours included, seperated because google seems to think being on a ferry is distance, I did not bike, hence it is not distance to me).