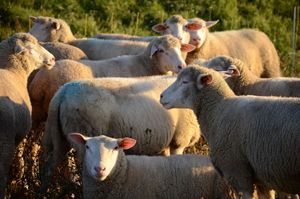 A forest by Wilhelmsdorf, Germany.

According to Swiss confederate maps the hash is located on (or close to) a track, it is however not visible in satellite imagery. Google is aware of the track as it routes through it.

Like my last expedition I intend to take the ferry to Meersburg and bike the rest of the way. Since this is a hash that is not so obviously findable I will be using my phone once I reach the forest that contains the hash. For the rest of the way I am currently printing out maps.

The entire trip should be shorter than my first hash. I also intend to leave earlier (in the morning this time) so I will not have to drive back in darkness.

I started out my trip at around 10 in the morning. After learning from my last expedition that messenger bags are not the best for longer distances I opted to go with a bike rack and a bag for that.

On the ferry I noticed how much better the weather was this time. After the short trip across the river lake I drove through several smaller villages with my most interesting encounters in these being cows.

At some point something I had not earlier noticed came across my path: The hash was on a hill (or somewhere at the hill), resulting in an exhausted hasher and some pretty nice views. The additional weight brought on by the heavier rack and bag combination was not helping. After shortly checking out Höchsten and the view here I got to the forest that has the hash. I had marked the loop in which the hash is on a map, but used my phone to find the exact location as my map was not really accurate enough. 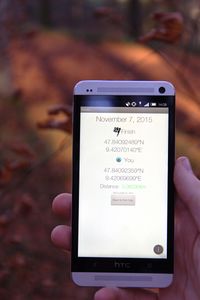 Looking for a place to eat I went back to Höchsten and had a picnic on a field. Some dogs were digging a hole or something in said field. I then tried to figure out what the tower does (Radio? TV? Both?), but apparently it is a construction site (I don't believe them).

Unfortunately as the route back was the same as the way up the hill, I did some average speed of 60km/h on the 16% incline I had rode up. Thanks to the rather harsh turbulences caused by this, I was whipped by my t-shirt which was happily flopping around in the breeze.

I also managed to loose my jacket. It was improperly fixed to the rack, and I did not think I would be going ludicrous speeds, so I did not think about attaching it a bit better. Sadly I noticed this loss way too late for a search-and-rescue operation (night was gonna fall, the distance I might have lost it on was rather great, and additionally the speeds I was going at might have propelled it who-knows-where).

At least on the route back the sunset allowed for some pretty nice views in Meersburg. (The probably most impressive sunset that I can remember ever seeing. For the entirety of the 15 minute ferry trip I was in awe and amazement.)

I still have some other pictures, but I have to stitch those together. They'll be here soon.

No tracklog as I did not have a GPS device that does this.

Panoramas are difficult. And they can break formatting.