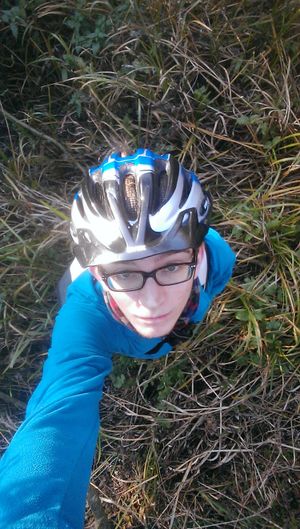 In a bush by a ditch in Konstanz, Germany.

This is not that far from where I live and do things, which means that I will probably go there by bike after noon. ETA: ~13:00 local time (UTC+1)

I left for the university in the early morning fog. After my first course here I got distracted by the printer show-case they have to let people voice their opinion on which printer system to get for the university. As a result I did not get to the hash by the time I originally intended.

The route to the hash was rather short, (~3km). I started at the biology department, and then went through the forest to Wollmatingen. After entering the district I turned into a small pedestrian dirt road. My route took me over a surprisingly well-maintaned bridge, and then into the bushes. These bushes are the type of place I would expect a dead body or something, lot's of litter in and around them.

Anyhow, after crossing a small dried-up brook (which I swear was on the other side of the hash in google maps. Either my phone's GPS was being silly, or google is just wrong about that brook), I reached the hash, found nothing worthwhile, left from the bushes out of fear of my bike being stolen and went back to university.

After what appeared like ages of grueling boredom, configuring apache, and designing a shitty icon, I had my second (and final) lecture of the day and went back home through the fresh fog that had formed due to the sunset.

I tried to get my phone to keep a tracklog with an app I found. It has one point every 15s, so it is rather low resolution. I just looked at it, and it is not really worthwhile. Really bad. But here you go non-theless: [1]