In Verkkojoki, Valtimo. The point lies in an area of pines right next to a gravelpit. 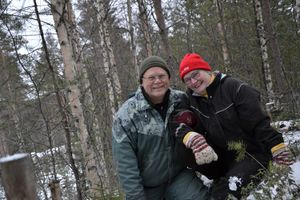 A very happy new year to all geohashers! Pastori and Wife were excited to go hashpoint hunting on the very first day of the year. The point in the neighbouring village was only 3,7 km away as the bird flies. But they had to take the car anyway and they drove 10 km one way with a few degrees below zero and an added cold wind. They set out after breakfast at 9:30 when the sun was barely up. Driving on icy roads with studs in his tyres Pastori got them safely to the gravelpit near the point. From the car there was only 100 m left to the point. However, the point was up on the edge of the gravelpit so to get there, Pastori and Wife had to engage their own four-wheeled drives and climb up the wall of the pit. And there the point was, at an accuracy of 3,7 m. Wife enthusiastically took some pictures of the surroundings, themselves and the thermometre and then they headed back to the car. This time around they just slid down to the pit. They got quickly out of the freezing wind and in to the warmth of the car and back home to write the report.