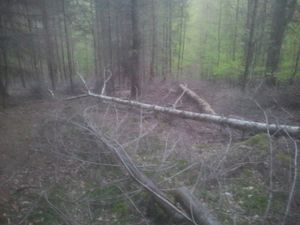 Forest next to Hagelloch, Tuebingen, Germany

A too-close-to-let-go hash. Unfortunately, plans are quite tight, but I think I can squeeze it in at around 17:30. Hopefully it's not raining!

After I wasn't able to geohash in March, I finally had an easy opportunity to at least fulfill my current geohashing-goal (1 geohash/month) in April. I had to rearrange plans and started at 19:30.

It was nice weather, but a little muddy from the rainfalls from the last days. I was cycling very slowly, in fact I even stopped for a 20min telephone call in between.

The geohash was quite unspectacular in the forest. Nothing much to tell, stupidity distance was 500m, so I actually was walking quite a bit through steep forest. Little bit of hashdancing was required because of forest, too.

I was back at 21:00 before it got dark completly (which is good, because some idiot stole the backlight of my bicycle recently).

Expedition by Ekorren and Nelly01

We hadn't expected that anyone else would go there as well, so we didn't even look for plans...

We met at Hagelloch, walked down the Diebsteige (an incredibly steep forest road), then followed an old muddy logging trail until about 100m from the hash. Climbed the slope and finally got there. After a food break at the hash, we continued uphill and went to visit nearby Castle Roseck.

May be uploaded within of the next five years.