In the woods near Fall Creek Lake, northeast of Lowell.

In 1828, Jedediah Smith led an expedition north from Mission San Jose, in the California territory of Mexico, in hopes of finding an overland route to Fort Vancouver, on the Columbia near where Portland would eventually be built. Daunted by the Siskiyou Mountains to the north of the Sacramento Valley, he decided to make for the coast, where the beaches might make travel a little easier. After a grueling crossing of the Coast Range, the party reached the Klamath River and shortly afterwards celebrated when they climbed a hill and saw that they were in sight of the ocean. But between the terrain and the thick rainforest vegetation, it would take them 16 more days to get to the beach.

Well, that's what our forests can be like in the rainy parts of the Northwest. Especially in areas where trees have been felled by recent storms -- in the last dozen years, say -- the vegetation can be almost too thick to move through. Also, the footing can be really treacherous, and places that look like forest floor can actually be just a thin layer of soil trapped between two logs, or something that looks like a nice sturdy log actually can be so rotten that your leg will go right through it. If you then throw in the tough, thorny Himalayan blackberry bushes that have made themselves at home in most western Oregon forests -- and ol' Jed Smith didn't have to deal with those -- it can be really hard to get to your hashpoint.

Nor did Jedediah suffer the way I do with a GPS in this kind of environment. The problem is that since you can only go a few halting steps at a time, your GPS doesn't have the continuous movement it needs to project your distance of travel. So, you know how far you are from the hashpoint, but you don't get reliable feedback about what direction it's in. And then, if you're in a gully under a thick forest canopy, the signal gets poor enough that even a good GPS unit loses some of its resolution.

So anyway, if I'd known it was going to be this kind of environment, I wouldn't have driven 107 miles to get there, but having driven 107 miles to get there, I was under a certain amount of pressure to complete the expedition. From where I parked the car, 150 feet from the hashpoint -- that's about 50 meters -- I first tried walking down the road a bit and approaching from the east to avoid a steep slope. That approach soon bogged down in briars and fallen logs, so I went back to the car and tried again, coming in steeply downhill from the northwest. It wasn't pretty, and it wasn't much fun, but I eventually made it down to a point where it seemed that I could cross over the creek on a log and be right at the hashpoint, or possibly fall off the log down into the creekbed, break both legs, and die horribly, alone in the woods with no one to hear my gradually weakening screams.

As I contemplated this risk management scenario, I happened to notice that the app on my phone was congratulating me on reaching the hashpoint. Then I noticed that my GPS was telling me that I was four feet from the hashpoint. Excitedly, I waved it around, and it said I was two feet from the hashpoint. And, as I spun around, it gave me distances ranging from two to 22 feet. Well, that would be the poor signal under the forest canopy, I guess.

Since this was a new graticule for me, I do wish it had been a slightly "cleaner" win, the kind where your GPS gets down to zero and you can tell that you're standing on the same manhole cover that you saw on the satellite image. But despite that, I feel like I've got a good data-supported success out of this one.

On the way out, once I'd climbed most of the way back up the slope, I stopped for breath and leaned against a tree maybe 8 inches in diameter. That's what, more than 20 centimeters. It was completely rotted through, and immediately collapsed to the forest floor with a resounding crash. I was glad to get back to the road.

This was my first-ever expedition to the Oakridge, Oregon graticule. 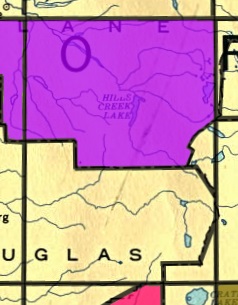 Since Oakridge was a "donut hole" on my graticule map, this expedition causes a real flurry on the Minesweeper front.