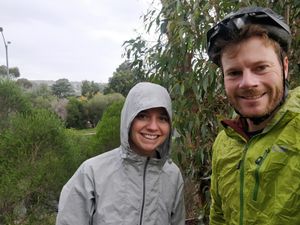 On a sloped road verge in Keilor.

Ruth and I had been hoping to go on a bit of a ride this weekend and in my mind the Maribyrnong trail up to Brimbank Park was a good candidate. So it was fortuitous that today's geohash was close to this very route, just beyond the termination of the trail.

We set off after lunch, just as the sunny morning gave way to a windy, overcast afternoon. We frustratingly negotiated the bustling foot-traffic of the Maribyrnong trail - everyone being out and about because the gyms are closed and there's nowhere practical to go.

After climbing a few hills and winding our way along the circuitous river we reached the end of the sealed road and proceeded on gravel. My Surly Troll, with its 2.5 inches of knobbly tyres, was fine with the terrain but Ruth's Liv Thrive road basher was a little less certain on this surface.

The river provided distraction, however, displaying reedy rapids, slumping river red gums and towering truss bridges. Soon we arrived at Brimbank Park and we worked our way across a weir into the suburbs of Keilor.

A few awkward road crossings just as it started raining deposited us at the road nearest the hash. We dumped our bikes in the grass and clambered up the steep hillside of the road verge to reach a dilapidated track upon the side of which the hash was situated. We took photos, congratulated ourselves on mission success and returned to our bikes.

We celebrated this hash-triumph with a stop-off at the Keilor shops to buy medium chips and gravy (pictured below). This gave us the energy to navigate our way home through the Keilor cemetery, over an almost comically long, splindly freeway pedestrian bridge, past an urban-renewed quarry and down the Steele Creek bike path - a part Melbourne's cycling infrastructure I had yet to explore - battling clouds of insects invisibly hovering at face-height.

At the point of retracing our Maribyrnong River steps we veered off to take the roads home, mainly along the Craigieburn rail line. Coincidentally, Ruth saw some friends outside a house in Moonee Ponds as we rode by.

The final stretch home through Ascot Vale was a display of autumness - saturated coloured leaves backdropped by a gloomy sky. It rained shortly after we got back inside where we were reunited with our cats.