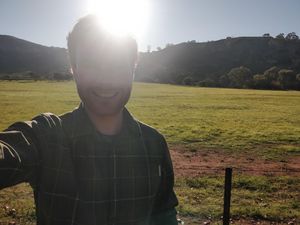 On a farm just outside Bacchus Marsh.

The Covid-19 restrictions had just been eased up so a bunch of us decided to go on a daywalk somewhere out of the city. After some deliberation we chose the Brisbane Ranges, centred on the town of Steiglitz.

The weather was sunny but cool - ideal for walking. We arrived back to the cars in the mid-afternoon, which was handy because I had had my eye on a geohash near the way home that was now possible to reach.

So three of us, me, my girlfriend Ruth and our mutual friend Fi, jumped into our little car and headed back home via the alternative, geohash-adjacent route.

We made our way up the east side of the Brisbane ranges, through Anakie and past the Fairy Park. Soon we were in the outskirts of Bacchus Marsh amongst the new, sterile housing developments - all with so little outdoor area despite being so far from the city.

Taking a road snaking its way along Werribee River at the bottom of the gorge we quickly arrived at the location of the hash. It was just inside a paddock next to the road.

Now, I knew there was a good chance we'd have to jump a fence to get to the hash, but it was a bit of a shock to realise how fency the fence was: two layers of tightly-bound wire, the outside with alternating barbs, the inside with an inward-facing electric line. After some dithering I squeezed myself under the first boundary, across the DMZ, under the second boundary and to the hash.

I looked around and saw a farmer out at his farmhouse watching me from next to his car. A dog in the distance had bounded between the fence-lines and was running towards me, barking excitedly.

Hurriedly, I took a screenshot of the Geohash app to make sure I'd got there, this time dispensing with my careful shuffling to get to within 1m of the hash (5m is my defined 'success'). I legged it back to the fences and crawled through them a little in advance of the dog reaching me.

My compadres provided support from the road. When I roached them we all casually made our way back to the car, chucked a uey and headed back to Melbourne - a city skyline made pristine by the pandemic, the Dandenong Ranges backdropping the skyscrapers in stark definition.

The trespass hashes are always less satisfying than the public access ones, although I think legally it's only trespass if you refuse to leave when asked. But sometimes you have to do what's necessary. One must think of the bigger picture.