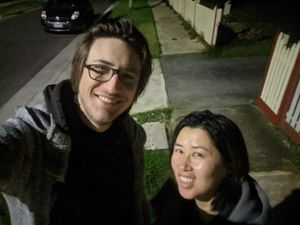 Friend convinced us to do this one since we live close by. Didn't even have to put proper outdoor clothes on. Overall a win.

Steve and Lachie rode over around 10pm. We knew Felix was on his way, so we messaged him to say we'd already gone home, but hung around drinking beer. As you do.

I didn't notice this geohash until late in the day, while I was over at a friends' place in Richmond brewing beer. I immediately alerted Cat and Mitch since it was so convenient to their place. As I see above they got there.

I also messaged Lachie and he and Stevage made a separate attempt.

After I'd returned from Richmond I changed bikes and headed out towards the hash at about 10:30pm. Sadly, Lachie messaged me to say he and Stevage had already returned from the hash so I'd have to do it on my own. Ah well.

But no! When I arrived I was surprised to see Steve and Lachie still at the hash, sitting under a tree on the side of the road drinking beer. They'd lied to me!

We hung out for a little while, I drank some port with the others, took photos at the hash and we all rode home together via the Moonee Ponds Creek bike path, through the fog.