On a farm track, in Sélestat.

After looking at the weather forecast, I wasn’t very keen on attempting another Bicycle Geohash even though the coordinates were close from home and I could earn a Drowned Rat Geohash. Also I was expecting two phone calls in the afternoon.

So I asked my dad to drive me to Sélestat and stayed at his office until the rain stopped. Then I walked the 2.5 remaining kilometers to the coordinates. 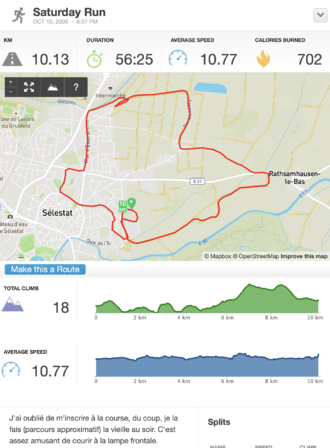 I lived for 7 years in Sélestat and regularly goes here to visit friends and family. Had I already been on that very specific path? Yes, I had. The geohash is located just 10 meters from the route I took during an evening run on 2009-10-10. I remember that run vividly because it happened the day before the Sélestat 2009 10K race, which I wanted to take part in. However, due to bad planning I had not been able to register and had therefore decided to run the race's route (or something resembling it) on my own, before everyone else, with a headlamp. I took a wrong turn, ended up on this path by mistake and had to turn back after encountering a barrier (Don't ask me why there was a barrier there, I could barely see it). Conclusion: Bad planning leads to interesting stories.