On a field near Kindhausen.

Take the bus 305 to Kindhausen and walk to the hashpoint - like two days ago.

Two days ago I visited the GeoCache GC4YGJE Der Nachtwächter. Soon later I checked the website to see where the Geohashes for the weekend are. The one for Sunday was just a few meters away and in plain sight! With the clock at 17:28+02:00 the hashes where already 2h out however. Any way, today I had to visit the place again. Just for the memory of this coincidence. Near the hash is a tiny pond a bit hidden. It's a nice location - on Sundays: There is a army shooting range near by and they are quiet loud with all that explosives they "test" there.

The trip was uneventful.

I did add the pond and a barely visible track to OSM. Here is my commit. 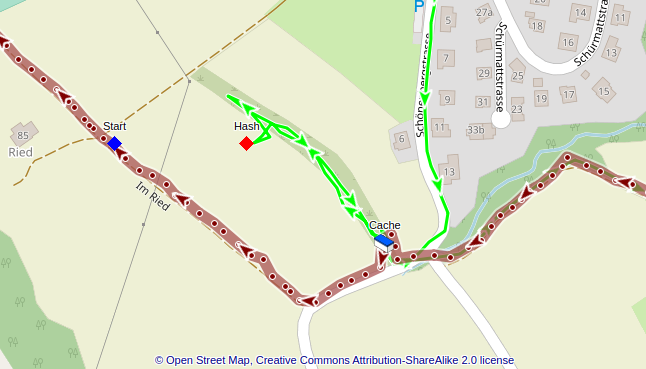 Red is the track from Friday, green the one from Sunday.