Just off the Green Trail of the Pawling Nature Preserve in Dover, NY.

This geohash is very close to the previous day's location, only about 2 miles away. It still isn't that close to my house, but close enough where the trip is feasible. The difference between this location and the day before's is that this one doesn't appear to require trespassing, obviously a huge plus. When I initially looked on Google Maps, I was disappointed because it appeared that this location was on the edge of someone's yard, but OpenStreetMap and an online map of the Pawling Nature Preserve both show that the geohash is within the boundary of the nature preserve, although slightly off the path.

It appears I'll be able to park at the Dutchess Exotics Pet Supply, which sounds like a pretty interesting place. Once I get there, I'll need to find the entrance to the Orange Path right on the other side of the street, although that path doesn't show up on Google Maps. I'm a little nervous about entering the preserve, straying off the Green Path, finding the geohash, and making my way back to the path all in the dark, but it's a very small distance I'll have to travel and I'll have my compass on my phone. Very excited to finally get my first successful geohash.

The road out to Dover makes me feel like a pioneer braving the mountainous expanses of the Oregon Trail. I'm pretty sure if my car weren't such a squat, sturdy gal, I would have toppled on some of those sharp turns down the mountain. When I finally arrived at the deserted pet store, the only person in sight was a lone dog walker who seemed content minding his own business. The entrance to the Orange Trail was easier to find than I had thought, as I spotted steps ascending onto a path that was quickly swallowed by the darkness of the forest that surrounded the great Appalachian Trail. 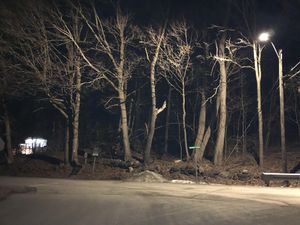 The ascent into oblivion.

Finding the junction where I would turn off the Orange Trail onto the Green Trail was difficult in the dark, and I kept second-guessing myself and whether I had actually found the trail until I found the tell-tale green marker pinned to a tree. I knew I'd have to head north off the trail a bit, but what I hadn't known was that I'd have to head down a steep hill with a stream at the bottom, forded only by a skinny and somewhat slippery log. Since I was already doing something stupid by being there in the first place, I figured, why not do another stupid thing, and managed to cross the log, keeping my balance until the very end.

Now, the hash was only 1" away according to my phone's compass, and after heading up the other bank of the stream I had made it: 41°37'31"N, 73°34'14" W. That was enough verification to satisfy me, but just to take every possible precaution to validate my accomplishment, I pulled up my map. My phone was a little finicky with the GPS, so my location kept shifting around a few meters until I took a minute to pinpoint the exact location of the geohash so I could screenshot it. The exact spot was just another few feet of bramble and leaves, but it was really fulfilling.

By this point I just needed to find my way out of these haunted woods before a large threatening mammal, man or beast, happened upon my merry jaunt. I knew I would just have to head south a bit until I found the trail again, but with it being dark and all, I was just a tiny bit nervous I would manage to get myself lost. Plus, my hands were very cold by now in this near-freezing temperature and the adrenaline the whole thing had given me made me start to breath heavy. When I reached the Green Trail shortly after another perilous journey across the log, I breathed a sigh of relief, and from there the path led straight out to the steps, the road, and freedom. I had done it: my very first geohash.

As a bonus little nugget of interest, my journey home was delayed by the Metro-North train, which had stopped at the Harlem Valley - Wingdale stop. I didn't see anyone get off, and it's kind of hard to imagine anyone ever needing to take the train into the city from there, considering it's so rural. You know what else the Metro-North made me think of? Tomorrow's 4:00 meetup in the graticule below me is right smack dab in Prospect Park, in Brooklyn. I don't know if anyone's planning on taking advantage of that, considering COVID, and I know it's too far for me, but it just seems too perfect to not go to.

My first successful geohash certainly didn't lack in intrigue and a feeling of "What the hell am I doing out here?", but I think I've had my fill of nighttime geohashing for the time being. I'm excited to find one that doesn't make me feel like a lunatic traipsing around with nothing but a flashlight and a prayer.