Today's hash presented a great opportunity. Not only was it a chance for me to break into double digits with 10 successful expeditions, but it was the first time I was trying for hashes on consecutive days. On top of that, this would be my first expedition in the graticule immediately west of me, the graticule of Newburgh, New York. Because of all this, it would have been nice if today's expedition was somewhat memorable, to commemorate the occasion. Little did I know it would be more than memorable enough to meet my needs. 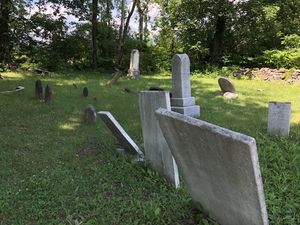 In another 200 years, none of these will be legible. Maybe it'll all be gone.

The drive wasn't obscenely long, and after a little time I pulled over when I saw the sign I was looking for, a sign that advertised Stewart State Forest. Unfortunately, there was a sign by the trailhead that read "No Parking", for whatever reason, so I decided to park in a gravel turnoff right up the road and walk there. This allowed me to stop by the [Cemetery] that was right on the side of the road, and you know it's always cool to check out an abandoned cemetery. I think the oldest grave I saw in there was from the 1820s, and there were plenty that were illegible enough to have been older. Really makes you think about the magnitude of change our society has gone through in the last 200 years, how quickly it's all changed compared to other times in history. Wild. 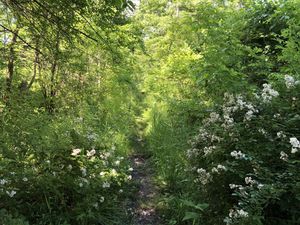 This would have been much nicer to walk down than where I ended up.

I got to the trail and starting walking down it, noticing that it was extremely overgrown for something that was marked as a road on Google Maps. I then came across an adorable little diamondback terrapin, which apparently are fairly uncommon. I limited my photos of him so as to not annoy him, then a minute later I pulled out my phone to make sure I was on the right path. Turns out, I wasn't. I had turned off the road prematurely at the wrong Stewart State Forest sign. It wasn't a waste, since I got to see the graveyard and my turtle bro, but I still cursed my stupidity for not checking my location when I parked.

A couple minutes later, I found the right parking lot, where, for some reason, there was a rooster just chilling in the parking lot. No one else was in the parking lot, and it's not like there was a home right there. Had the rooster been brought there to walk with someone, or had he escaped from a yard across the street? Was there a population of feral roosters in the area? These are questions that will haunt me 'til my dying day. Anyways, this trail was much different than the first path, since it was a well-maintained gravel road that nevertheless still banned motor vehicles. Eventually I made a left onto another path, walked a bit, and made a discouraging discovery. The hash was just a little ways off the path in the woods, but the terrain was completely unconducive to walking. After a few steps, the ground turned into 75% stagnant water with a couple mossy root clumps poking up for me to jump across. Not my idea of a pleasant stroll, but I had to do what I had to do. 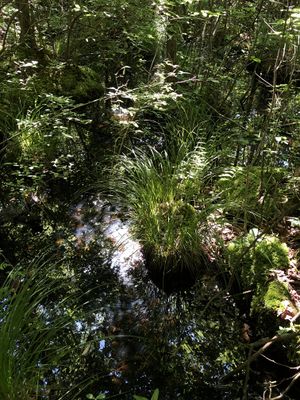 This is the hash. Whoever blazed this trail through the swamp may have missed a spot or two.

As hard as I tried to keep my feet dry, eventually both sneakers slipped into the muck, but I'm glad I didn't take a full-body tumble. The last thing I needed while I was bushwhacking was an indecisive GPS, but that's exactly what I got. A couple times, I told myself it couldn't be any farther in, only to check and realize it was just a little bit further, just a tiny bit further. It's not like it was miles from the trail I had left, it was just extremely slow going since I was being careful to not get my feet wet. Finally, I found the general vicinity of the hash, somewhere close to a couple trees rooted in the midst of a larger stretch of bog water. I never saw myself cross the exact spot on the GPS, but I approached the area from several sides and walked through it to increase the odds that I did it. It was a small enough area to have narrowed it down to. Eventually, I declared the effort complete, and shifted my attention to making it back to the trail and not dying in this god-forsaken quagmire. There was a scary moment where I heard some footsteps nearby and thought it may be a hunter, so I announced my presence by loudly saying "OK, I guess I need to figure out how to get out of here." I didn't end up seeing anyone, but that certainly put me on high alert for a bit.

After a shorter amount of time than I thought it would take, I found the trail again. Turns out the going is easier when you aren't concerned with finding an exact geographical coordinate, who would have thought. Once I reached the trail, I dusted myself off and questioned what in the hell I had just done. Was it worth it? Yes, without a doubt. It may not have been a walk in the park, but it was a really unique experience, one that would certainly serve as a memorable expedition. The only thing that then came to mind though were doubts about whether the success was legitimate. Had I dwelled long enough to ensure I had stepped on the actual spot? These thoughts made the walk back to my car somewhat somber, until I came to the conclusion that this expedition was just as legitimate as all of my other successes. Being exactly sure of one's coordinates more precisely than 10 meters in a landscape with no landmarks is unnecessary, and walking all around and through the area of the hash is certainly enough to characterize a job well done. As I got to my car and assured myself that I was not betraying the sacred spirit of The Hash, I saw my rooster friend again. As I backed out of my spot and started to pull away, I heard the cock crow once, twice, but not thrice. I smiled. There was no betrayal.