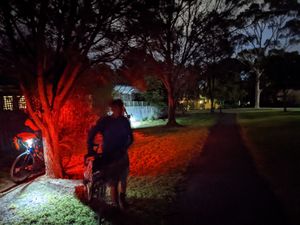 In a park in Box Hill.

The mysterious being who places geohashes did a sterling job this Tuesday. They were faced with the daunting task of selecting an interesting, accessible location with good amenities within the vast residential uniformity of the eastern suburbs. Leaving the task to chance would have very likely ended up inside a house, or, best-case scenario, the middle of a busy road. Fortunately, they did their homework and carefully selected a small park with a picnic table, conveniently placing the hash up against a fence under an elegant tree.

When news of the divine intervention trickled out, a gang of enthusiasts on bikes assembled. At 4? A bit after 4? Make it 4:30? Oh I'm giving blood and there's a queue. We left Fed Square closer to 5.

Your humble narrator – Steve – was quickly outpaced by the horrendously fit group, making an expected pleasant cruise more like an intense evening fitness session. We followed the main bike commuter route out along the Yarra, then the Gardiners Creek Trail, relying on Laura's knowledge of road works in Glen Iris to navigate a couple of detours.

Confusion reigned as we crossed the Anniversary Trail. Somehow, everyone knew something about where we were going, or about how the trails connected, or had a map, but not all of those things at once. Much furious agreement that sounded like disagreement followed, before we somehow ended up where we were going anyway.

Alex led us off the trails into the suburban road network without mishap until we came to cross Canterbury Road. Riding up the hill, we all saw the impressive pedestrian bridge sweeping around and over, and hoped we'd get to cross it - but that was not the plan. Instead, we huddled in the dark just next to the crest of the hill, waiting in vain for a break in the steady flow of traffic in both directions.

Alarmed at the difficulty in judging the speed and distance of the headlights, I opted to go back down and over the bridge, reasoning that although it would take longer, it was much safer - maybe I'd persuade one or two others to come, too. Surprisingly, by the time I'd gone down and back up, no one else had yet managed to cross, although Lachlan did eventually manage it - while the others enjoyed the steep looping overpass.

Victoria Rose Reserve suddenly appeared and we were at the hash! Those of us who had pre-investigated the site made a beeline for the correct tree and called it done, while Felix wandered around the middle of the park, insisting he was very close, and then wasn't, and the point was even further north, I mean south, oh yes, here it is.

At the aforementioned picnic table, for once there was an embarrassment of riches in the beer stakes, with more than enough to go around. Interest in my 7.5% IPA rapidly evaporated when a foamy opening forced me to slobber all around the opening. Then the question of dinner was raised...

...leading to an even more exhausting dash along the Koonung Creek Trail to the Yarra Trail where Alex peeled off northwards. Time for my local knowledge to guide us over Chandler Highway to the Heidelberg Shimmy, and then to the Terminus Hotel for more beers, burgers, steaks, parmas, and discussions of dessert, skyscraper construction, and such.